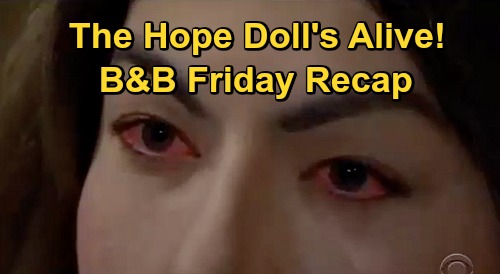 Finn said that he asked Thomas point blank if Hope Spencer (Annika Noelle) said that she wanted to be with him, but that Thomas avoided answering. Steffy reeled, and she really hoped that Thomas wasn’t still fixated on Hope.

Meanwhile, in the Forrester CEO office, Hope told Thomas that she liked his design sketch as Thomas flashed back to interacting with the Hope mannequin at his apartment. Hope expressed concern about Thomas’ lack of sleep and how tired he’d been lately, and she asked if Thomas wanted to talk, but Thomas refused.

Hope and Thomas then talked about how Thomas had moved on from Hope and how well they were doing at coparenting Douglas Forrester (Henry Joseph Samiri).

Hope was glad to see that Thomas was moving on from his obsession with her, as Thomas again reminisced about the mannequin talking to him. Soon, Thomas took off after getting a text from Steffy, saying that Hope didn’t have to worry about him obsessing over her anymore.

Later, Zende Forrester Dominguez (Delon de Metz) brought a design sketch to Hope, which she loved. Zende noticed one of Thomas’ sketches on the desk and commented that it was very good.

Hope said that Thomas was a talented artist and a tortured one, too. Hope mentioned the past pain that Thomas caused by thinking he was in love with her, and she hoped that he wasn’t still lying about not being obsessed with her.

Back at Steffy’s place, Thomas arrived and Steffy said, “Tell me that Finn misunderstood and that you didn’t say that Hope would rather be with you.” Thomas said that he wasn’t sure why Finn would say that. “Because you said it,” Finn said matter-of-factly.

Thomas calmly explained that he had been all over the place earlier, and that he was talking about how he felt in the past – not now.

Finn didn’t look entirely convinced, and Steffy pushed Thomas, who said that he understood that Hope was married to Liam Spencer (Scott Clifton) and that he accepted it.

Thomas said that he’d always care about Hope, but that she wasn’t the only part of his life. “I go home now and things are very different. I don’t wish that she’s there,” Thomas said.

At the Forrester mansion, Ridge Forrester (Thorsten Kaye) talked with Eric Forrester (John McCook) about how he and Brooke Forrester (Katherine Kelly Lang) were back together.

After a little back-and-forth about what Quinn Forrester (Rena Sofer) and Shauna Fulton (Denise Richards) had done, Quinn walked through the front door. Quinn said that she needed to be home and to see Eric.

Eric said that they had nothing left to say to each other, and Quinn urged Eric to spend some time with her. Ridge started getting agitated, and Quinn asked if she could explain herself to Ridge.

Quinn launched into an explanation about how Brooke was making Ridge miserable and how she got carried away with the idea of Ridge and Shauna. Ridge couldn’t take it, and he yelled and walked out.

That left Quinn and Eric alone, and Quinn wanted to know if Eric still wanted her to be his wife. Eric exploded, saying that this all hurts, and that believing in Quinn might just be a little too hard these days.

Quinn begged Eric to forgive her and to let her come home, and not to let Brooke have a say in their marriage. Quinn even noted that Eric hadn’t taken down her portrait.

Just then, someone walked down the staircase behind Quinn, and it was Shauna. “What’s going on?” Quinn asked. “Eric, what is she doing here?” Shauna looked smug and smiled.

Back at Steffy’s place, Thomas had gone, and Steffy lamented about how she always believed her brother, and then he goes and does something to make her worry.

Ridge walked in the house, and Steffy told him that she was starting to worry about Thomas. Ridge learned about Thomas’ statement to Finn off-screen, and he and Steffy hoped that Thomas was being genuine.

That was a terrific episode of B&B, and there’s plenty more coming next week, so stay tuned! We’ll give you updates as B&B news comes in throughout the weekend. Stick with the CBS soap and don’t forget to check CDL often for the latest Bold and the Beautiful spoilers, daily episode recaps, and news.