The Bold and the Beautiful Spoilers: Friday, October 30 – Hope’s Struggling With Life – Ridge Lashes Out At Quinn 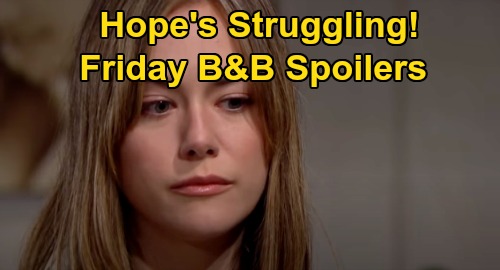 The Bold and the Beautiful spoilers for Friday, October 30, tease that Quinn Forrester (Rena Sofer) will once again ask for forgiveness. As B&B viewers know, Quinn has moved out of the Forrester mansion and in with Wyatt Spencer (Darin Brooks) and Flo Fulton (Katrina Bowden), and her plan is to reconcile with Eric Forrester (John McCook) as soon as she can.

The only problem is that Eric is bitterly disappointed in Quinn, and he’s reluctant to take her back.

Well, on Friday’s episode of B&B, Quinn will find herself asking both Eric and Ridge Forrester (Thorsten Kaye) for forgiveness. Perhaps Quinn thinks that if she can get through to Ridge, then Eric might come around, too.

Unfortunately for Quinn, she’ll be met with serious resistance and anger on Ridge’s part, and he won’t hold back as he comes down on Quinn hard.

Of course, since this will probably be the first time that Ridge has seen Quinn since finding out about what she did, he’ll have a lot of pent-up frustration and anger over her manipulative scheme.

Ridge will rail against Quinn for manipulating his divorce from Brooke Forrester (Katherine Kelly Lang) and for helping to arrange his marriage to Shauna Fulton (Denise Richards). In fact, at this point, Ridge will probably blame Quinn far more than he blames Shauna.

The whole scene should be pretty intense, and Eric will probably be the one who suffers the most. Eric really feels heartbroken and taken advantage of, especially since he defended Quinn to Ridge and Brooke time and time again.

It should be a difficult moment for Eric, as he notes Ridge’s intense anger and realizes once again all the harm that Quinn has caused.

Meanwhile, on the new episode of B&B on Friday, October 30, Hope Spencer (Annika Noelle) will have some difficulties in balancing her work and home lives.

As B&B viewers know, Hope has been trying to make things work when it comes to raising Douglas Forrester (Henry Joseph Samiri) in her home with Liam Spencer (Scott Clifton) and Beth Spencer (River Davidson and Madeline Valdez).

Things seem to have been going well, but now Liam is again worried about Thomas Forrester (Matthew Atkinson).

Perhaps Hope will encounter some scheduling conflicts with Thomas, or perhaps Thomas will even blow off some of his parenting responsibilities.

Thomas is certainly in crisis these days, and he might need to take some time to deal with everything he’s going through psychologically. Whatever the case, it looks like it could put Hope in a bind and leave her having to find a way to manage.

Friday’s episode of B&B sounds terrific, so be sure to tune in! Stick with the CBS soap and remember that CDL is your go-to place for all of your Bold and the Beautiful spoilers, news, and daily episode recaps. We’ve got you covered!