The Bold and the Beautiful Spoilers: Friday, September 25 Recap – Steffy Pulls A Knife On Loved Ones – Ridge Disarms Daughter 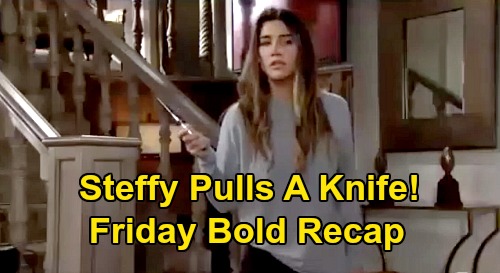 The Bold and the Beautiful spoilers recap for Friday, September 25, reveal that Thomas Forrester (Matthew Atkinson) was sketching in the Forrester CEO office and flashing back to Steffy Forrester’s (Jacqueline MacInnes Wood) erratic behavior when Zoe Buckingham (Kiara Barnes) walked in the room.

Thomas softly asked if Zoe had a moment to talk, and he said that he never had a chance to explain some things. Zoe seemed wary, but Thomas continued, saying that he hadn’t completely gotten over what he did, and that it was horrible, selfish, and cruel.

But Thomas said that he didn’t lie to Zoe about everything, and that he did really care about her – after all, he wouldn’t have proposed if he didn’t have feelings for her.  Zoe seemed uncomfortable with all of this.

Thomas said that he wanted the two of them to have a fresh start, and that he wanted everything said. Thomas then referenced Steffy and what she was going through, and Zoe wondered what was going on with Steffy.

Thomas said that he was really worried about Steffy, and that he had thought she was in a good place. Off-screen, Thomas told Zoe about Liam Spencer (Scott Clifton) taking Kelly Spencer (Colette and Avalon Gray) from Steffy’s place.

Zoe thought it didn’t sound like Liam to just take Kelly, and Thomas agreed. Thomas said that he had never seen Steffy like this – and that she was foggy and erratic.

Zoe asked why Thomas had stopped by Steffy’s and he said that he was checking up on her and dropping off a gift from Vinny Walker (Joe LoCicero). Zoe said that she was concerned about Steffy, too, and had been since the accident.

At Brooke Logan’s (Katherine Kelly Lang) house, Steffy demanded that Liam and Hope Spencer (Annika Noelle) hand over Kelly. Hope, Liam, and Brooke refused, saying that Steffy needed to say in the main house with them.

Steffy was arguing with everyone and rating about wanting to see her daughter when Ridge Forrester (Thorsten Kaye) walked in the door.

Steffy wailed, “Dad, they have Kelly!” Ridge bellowed about why everyone was keeping Steffy from her daughter. Brooke calmly told Ridge that Steffy needed help, and that there was a lot going on that he didn’t know about.

“Don’t listen to them!” Steffy insisted, then she rambled and ranted about Liam taking Kelly from the cliff house.

Ridge wondered if this was about Liam’s unhappiness with Steffy and the doctor, but Liam said that wasn’t it – rather, Steffy was still on the meds and it was putting Kelly in danger. “So my daughter’s a drug addict now, is that it?” Ridge grumped.

Liam explained about how he couldn’t wake Steffy up at the cliff house, and now Steffy woke up disoriented and slurring her words.

Liam recounted how he had asked Steffy if she was taking pills, and how Steffy had lied to him. Liam said that he found a bottle of pills in Steffy’s house, and that she admitted that she had been lying to everyone, including Ridge.

Steffy briefly flashed back to getting the pills as a present from Vinny, Ridge started getting impatient and he demanded that Steffy needed to tell him what’s going on.

Steffy then admitted that she took a couple pills, and Ridge teared up in shock. Steffy yelled and ranted, saying that she’s going through hell and that she can barely work and that she’s alone.

Steffy went on about how she doesn’t have Kelly or Liam, and that Liam took Kelly just like Brooke took Ridge from her and Thomas and Phoebe Forrester (Mackenzie Mauzy).

Liam said that he knew that taking Kelly would bring up memories and that’s why he didn’t want to do it.

“That’s all they are to you! Memories!” Steffy wailed. “I live with the pain every day and you are making it worse! You want me to be completely alone!”

Ridge finally seemed to grasp the reality of the situation with Steffy. “Steffy, talk to me,” Ridge said. Steffy then turned on Ridge, saying that they were turning Ridge against her.

Steffy lashed out, accusing Ridge of choosing Brooke and the Logans all over again. “You betrayed us, and you’re betraying your granddaughter.” Ridge insisted that they’d go talk.

“When my daughter finds out what you did, she’s going to hate you as much as I do,” Steffy growled at Ridge, who was nearly in tears. Ridge asked Steffy what her plan was – was she going to cut him? Liam? Was that going to solve the problem?

And with that, Steffy rushed out the door. Ridge picked up the knife and told Brooke to take care of his granddaughter. “I’ll take care of Steffy. She won’t be alone.”

Ridge left following Steffy, and Brooke looked shocked by what had just gone down. Hope started crying, and Liam completely broke down and sobbed, horrified by the impact of his own actions on Steffy.

That was an amazing episode of B&B, and next week should be just as dramatic, so stay tuned! We’ll give you updates as more B&B news comes in throughout the weekend. Stick with the CBS soap and don’t forget to keep CDL bookmarked for all the latest Bold and the Beautiful spoilers and news.

Us at the end of today’s #BoldandBeautiful episode 👇😭 pic.twitter.com/67ge8fKrp7