The Bold and the Beautiful Spoilers: Hope Blames Steffy for Hogging Liam – Beth Left Out, Kelly Gets All Dad’s Time? 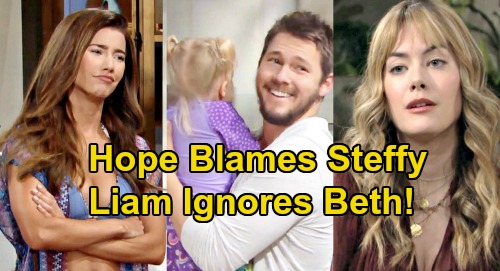 The Bold and the Beautiful (B&B) spoilers tease that Steffy Forrester (Jacqueline MacInnes Wood) and Hope Logan (Annika Noelle) could have another battle brewing. There was a hint about it during Hope’s recent faceoff with Liam Spencer (Scott Clifton), which led to Hope walking away from their relationship.

Before Hope officially threw in the towel, things got pretty heated with Liam. He ended up doing some ranting, which led to a significant comment. Liam pointed out that being there with Steffy and Kelly Spencer (Zoe Pennington) made him realize he didn’t spend enough time with his oldest daughter.

Hope fired back that Liam would have plenty of time now – though it saddened her to think of Beth Spencer (River Davidson and Madeline Valdez) missing out on father-daughter moments. Of course, Liam can’t be in two places at once, but he needs to balance his time between the girls.

Now that Liam’s hanging out with Steffy and Kelly so much, Hope’s bound to be upset and view Beth as the neglected one. The Bold and the Beautiful spoilers say more “Steam” family bonding is coming up during the week of February 3-7.

If this keeps up, Hope may confront Steffy about all the daddy hogging. She might blame Steffy – even though the blame should really be on Liam.

It’s up to Liam to connect with both his children, but that won’t stop Hope and Steffy’s rivalry from potentially intensifying. It always seems to happen when Liam waffles as usual.

B&B spoilers say Thomas Forrester (Matthew Atkinson) could easily use all this drama to his advantage. He might show Hope that he can pick up the daddy slack when it comes to Beth.

Hope might be wary at first, but she knows Thomas loves Douglas Forrester (Henry Joseph Samiri) deep down. She may not have always agreed with Thomas’ parenting, but she can acknowledge that he cares about his son. Hope might find herself willing to trust Thomas a bit more with Beth, too.

As the “Steam” fam bonds, Thomas may hope he can strengthen this budding “Thope” family with Hope, Beth and Douglas. Regardless, it looks like another round of Steffy and Hope conflict may be in the works! It could set up some story shockers and shakeups soon enough.