The Bold and the Beautiful Spoilers: Hope in Danger as Bitter Thomas Strikes Back – Love Is Gone, Now It’s All About Revenge? 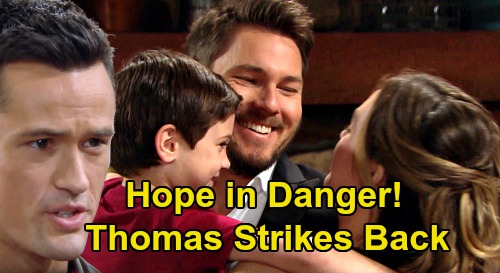 The Bold and the Beautiful (B&B) spoilers tease that Thomas Forrester (Matthew Atkinson) will make a big splash when he comes back on the scene. Thomas will have a new outlook, but that doesn’t mean it’ll be a positive one! It looks like Thomas will still be a troublemaker, but his methods and mindset should change.

B&B seemingly provided some closure during the latest wedding fiasco. It wasn’t the first time Thomas tried and failed to win Hope Logan (Annika Noelle) over. The Bold and the Beautiful appears to have gotten all the mileage they can out of that obsession story. It’s time to move on – and that was made clear by Hope herself when she insisted Thomas would never have her.

Now that Thomas has been crushed and publicly humiliated, he’s surely off licking his wounds somewhere. Thomas’ anger may also be building – particularly since Douglas Forrester (Henry Joseph Samiri) is now on Hope and Liam Spencer’s (Scott Clifton) side.

The Bold and the Beautiful spoilers say Thomas will refuse to let “Lope” steal his son, so that’s one way he’ll still be causing issus. However, we have to consider how Thomas will feel about Hope in particular. Thomas has been fixated on Hope for so long, but the wedding disaster may have helped him see the light.

If Thomas can’t have Hope and she’s trying to keep Douglas away from him, he may have no use for her. Thomas may turn against Hope entirely. The Bold and the Beautiful fans know Thomas is a pretty intense guy. He feels emotions deeply, which can be dangerous. Just imagine Thomas putting the same amount of effort into a revenge plot as his plot to win Hope over!

Hope’s been the object of Thomas’ desire throughout Atkinson’s stint on the show. Ever since we got a Thomas recast, he’s been all about Hope and building a life together. Now B&B will have to figure out who Thomas is without that obsession. They may do that by having Thomas make Hope a target instead.

In other words, Thomas’ goal may be to cause pain and destruction instead of getting that “Thope” future he always wanted. Atkinson shines playing a baddie, so B&B may not be eager for Thomas to reform just yet. The Bold and the Beautiful spoilers point to lots more drama – and Thomas is such a good source of it when he’s playing dirty!

As other B&B news rolls in, CDL will deliver updates. It sounds like Hope had better watch her back once Thomas pops back up! Stick with us for terrific Bold and the Beautiful spoilers, updates and news posts.