BY Heather Hughes on February 14, 2020 | Comments: one comment
Related : Soap Opera, Spoiler, Television, The Bold and the Beautiful 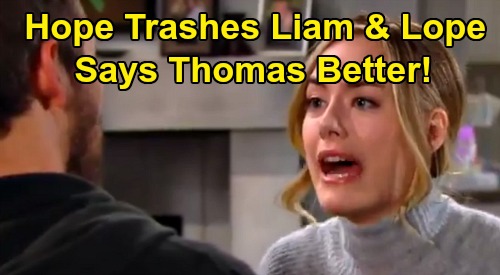 The Bold and the Beautiful (B&B) spoilers tease that an argument between Liam Spencer (Scott Clifton) and Thomas Forrester (Matthew Atkinson) will lead to another one between Liam and Hope Logan (Annika Noelle). After Liam hurls accusations about the real reason Thomas is putting on this Zoe Buckingham (Kiara Barnes) romance show, Hope will weigh in.

Liam will be shocked when Hope confronts him and defends Thomas. She may agree that Thomas’ motives aren’t entirely pure, but she won’t think Thomas is as evil as Liam makes him out to be.

Liam will think Thomas has managed to pull the wool over Hope’s eyes once again. He won’t understand why Hope constantly lets herself be lulled into a false sense of security with this guy.

Liam might bring up Douglas Forrester (Henry Joseph Samiri) and how Thomas uses his own son as a weapon. He’ll want Hope to see that for Thomas, it’s all about him and what he wants.

B&B fans know Thomas will use anything and anyone if it means getting his way, including Zoe. Liam will want Hope to accept that Thomas has no intention of truly moving on and only wants Hope back.

The Bold and the Beautiful spoilers say Hope will concede that Thomas has been manipulative. She’ll perhaps admit Thomas is still manipulative now, but she’ll basically shrug it off. As for the part about Thomas wanting a future with Hope, she’ll stun Liam by suggesting it wouldn’t be so bad.

Hope will present a hypothetical scenario in which she did end up with Thomas. She’ll contend that at least she wouldn’t have to worry about Thomas running off and kissing other women. The Bold and the Beautiful spoilers say it’ll be quite the sick burn!

Liam will be at a complete loss for words at that point. He’ll still feel like Hope’s being taken for a ride, but he won’t be able to argue with her on that. It’s true that Thomas would likely be loyal.

Regardless, it’s always nice when someone calls Liam out on his waffling tendencies and reminds him that he’s not the boy scout he thinks he is. The Bold and the Beautiful spoilers say some great scenes are coming up. You can check back here at CDL for all the latest B&B news and updates.