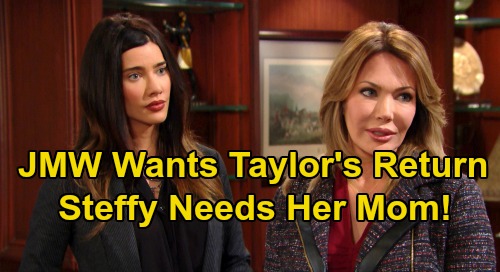 The Bold and the Beautiful (B&B) spoilers reveal that there’s one character who’s been noticeably absent. Since Taylor Hayes (Hunter Tylo) was so wrapped up in the bogus adoption story, it was strange for her to not be part of the aftermath. Taylor should’ve been around to rant about the deception and support Steffy Forrester (Jacqueline MacInnes Wood) over her loss.

Even putting aside the Beth Spencer (River Davidson and Madeline Valdez) reveal, Taylor was needed for Thomas Forrester (Matthew Atkinson). Not only did Thomas go off the rails, he nearly lost his life after that cliff fall. Hope also thought Thomas died in an acid vat at one point!

There’s still major drama surrounding Thomas right now, so there are ways for Taylor to get involved.

Will The Bold and the Beautiful eventually bring Taylor back? Jacqueline MacInnes Wood sure hopes so. In an interview with Soap Opera Digest, Wood talked about how much she enjoys working with Hunter Tylo. She’d really like for Steffy and Taylor to reconnect.

“I miss her!” Wood exclaimed. “She’s fabulous. I love her, and I would love to have more scenes with her. I hope she comes back again soon. Steffy needs her mom.” Wood’s on board with Taylor’s return and so are many B&B fans. Taylor’s advice could certainly be useful based on some upcoming storylines.

The Bold and the Beautiful spoilers say Thomas will try his best to reform, but that’s going to be tough. As Thomas struggles to keep his Hope Logan (Annika Noelle) obsession at bay, Taylor’s guidance could be a big help.

Meanwhile, Steffy will find herself in a familiar love triangle with Hope and Liam Spencer (Scott Clifton). It’s easy to imagine Taylor pushing Steffy to fight for Liam and their reunion.

B&B viewers can also expect a shocking death in 2020. Depending on who it is, Taylor might want to attend the funeral. If there’s any suspicion surrounding Thomas after this death, that’s something Taylor would need to show up for, too. There’d be some simple strategies to include Taylor in the action.

Of course, this is just Wood’s wish right now, but at least we know Taylor’s TV daughter is rooting for her comeback. The Bold and the Beautiful spoilers say Steffy has some chaos in her future, so let’s hope Wood’s wish is granted. She’s right about Steffy needing her mom!

Would you like to see Taylor return to B&B? We’ll give you updates as other news comes in. Stay tuned to the CBS soap and don’t forget to check CDL often for the latest Bold and the Beautiful spoilers, updates and news.