BY hellodrdavis on February 2, 2020 | Comments: one comment
Related : Soap Opera, Spoiler, Television, The Bold and the Beautiful 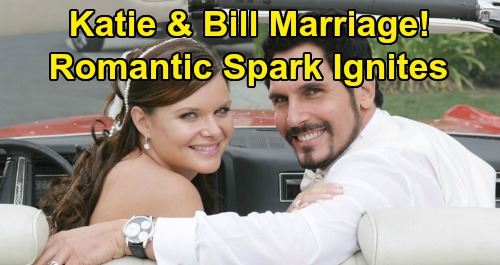 The Bold and the Beautiful (B&B) spoilers tease that viewers haven’t seen much of Bill Spencer (Don Diamont) and Katie Logan (Heather Tom) recently. Bill has popped in occasionally to see his granddaughter Beth Spencer (River Davidson and Madeline Valdez) and to offer advice to his sons Liam Spencer (Scott Clifton) and Wyatt Spencer (Darin Brooks), but Bill and Katie as a couple haven’t had a good storyline for a while.

In fact, we haven’t really seen Katie much at all since her kidney transplant storyline late last year. But soon, we’ll see Katie back as she supports Sally Spectra (Courtney Hope) through her health crisis.

And we can’t think of a better person to help Sally through a health crisis than Katie. Katie’s an empathic person who has been through her own share of medical woes, so she’ll be a great source of support and comfort for Sally.

Well, in the new year previews, TPTB promised that Bill and Katie would get wrapped up in their family dramas, so we should look for Katie to get pulled into Brooke Forrester’s (Katherine Kelly Lang) drama as she battles Quinn Forrester (Rena Sofer) in what looks like it will become an epic battle.

But Bill and Katie may have a fun arc of their own coming up, and that’s great news for “Batie” fans. The Bold and the Beautiful spoilers indicate that Katie will soon be taken by Bill’s attentiveness and new attitude.

Of course, it seems that Bill and Katie have been getting along well for months now, ever since they got back together after some matchmaking efforts by their son Will Spencer (Finnegan George). But then things took a very serious turn when Katie went into kidney failure, and her recovery took some time.

But now that her recovery is behind her and she’s seemed to adjust to her new kidney, donated by Flo Fulton (Katrina Bowden) perhaps it’s time for Bill and Katie to finally look to the future.

Could Bill’s newfound attentiveness and loving attitude all be working up to a marriage proposal? It seems like Bill and Katie might want to make their relationship official at some point, and it’s probably a move that would absolutely delight Will. Let’s not forget that official The Bold and the Beautiful spoilers tell us to expect a marriage proposal during February Sweeps!

Of course, there are a lot of “Batie” fans out there who would love to see these two tie the knot again, and it would be nice to see at least one really happy couple on the show right about now.

After all, Liam and Hope Logan (Annika Noelle) just broke up, as did Sally and Wyatt, and Brooke and Ridge Forrester’s (Thorsten Kaye) marriage may never recover. We need some happiness on B&B, and a “Batie” marriage would nice to see.

What do you think? Would you like to see Bill and Katie get married again? Stay tuned to B&B and don’t forget to check CDL often for the latest Bold and the Beautiful spoilers, updates, and news.