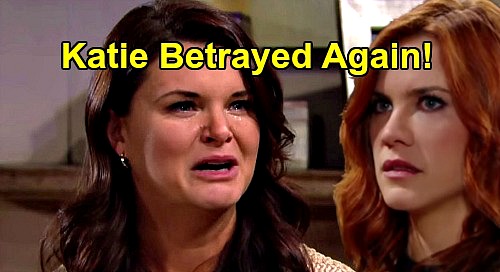 The Bold and the Beautiful (B&B) spoilers tease that Sally Spectra’s (Courtney Hope) bogus illness will ultimately be exposed. B&B viewers know Sally’s pretending the end is near with a goal in mind. Sally’s hoping that if she draws Wyatt Spencer (Darin Brooks) closer through her deadly diagnosis, he’ll grow to love her again.

This terrible plan is sure to bring a painful outcome, but Sally’s convinced she can do this. The Bold and the Beautiful spoilers say Sally will hope to put in a little more work and lock in Wyatt’s love before her “miracle cure.” However, Flo Fulton (Katrina Bowden) will soon be in the prime position to blow up this secret.

What happens once Sally’s terminal illness is proven to be a scam and nothing more? Wyatt will certainly feel hurt by Sally’s deception, but there’s another key player to consider.

Katie Logan (Heather Tom) has supported Sally throughout her “deadly” ordeal. Ever since Sally received her fake diagnosis, Katie was right there to guide Sally and make things as easy as possible for her.

Sally was pleased that Katie blabbed as expected, but Katie’s bound to feel like a pawn once the truth comes out. Of course, we also have to remember that Katie’s just been betrayed by not one, but two people she cares about. Bill Spencer (Don Diamont) and Brooke Forrester’s (Katherine Kelly Lang) secret make-out session really hit Katie hard.

Unfortunately, Katie’s going to face another tough blow when she realizes Sally’s been faking it. Katie’s come to consider Sally a friend – dying pal that she just wanted to help.

Sally’s been manipulating Katie and tricked her into having sympathy. This is sure to feel like another deep betrayal – and it could be one that causes a setback for Bill.

If Bill happens to be making progress with Katie by then, Sally’s shocker could serve as a difficult reminder. Katie may feel like people are always going to disappoint you, even when you never expected them to.

Bill may try to comfort Katie in the aftermath of Sally’s exposure, but she may push him away. Katie will be in pain all over again, so Bill may be the last person she wants to console her.

Will Katie seek comfort from some other handsome fella instead? Time will tell, but The Bold and the Beautiful spoilers say Katie definitely has more drama headed her way. As other updates roll in, don’t forget to stop by CDL frequently for more B&B news.

It sounds like Sally’s derailed scheme will cause plenty of problems in the weeks ahead. Stick with us for tons of interesting Bold and the Beautiful spoilers, news and updates.