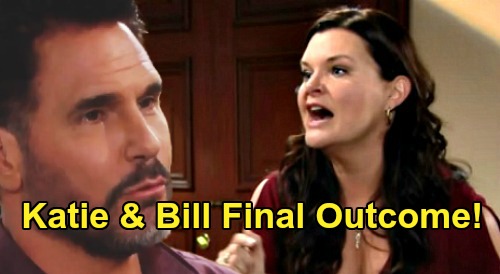 The Bold and the Beautiful spoilers tease that Heather Tom’s (Katie Logan) sixth award, which she received at the forty-seventh annual Daytime Emmy Award’s virtual ceremony, builds on an already impressive career resume. The actor has now won three Emmy’s (2012, 2013, 2020) in the Lead Actress category, which includes this year’s honor, one Emmy (2011) in the Supporting Actress category, and two Emmy’s (1993, 1999) in the Outstanding Younger Actress category.

Tom’s first two Emmy’s were earned while she was part of the cast of The Young and the Restless. Her initial award was earned during what was her first nomination.

Bold And The Beautiful Spoilers – Bold Show And Character Switch

Tom was cast to play Victoria Newman on Y&R in 1990. Her run endured through 2003. She joined the cast of One Life To Live in 2004 and played Kelly Cramer Buchanan through 2006.

The Illinois native made a bold move in becoming Katie Logan on B&B in 2007. Her history with sister show, Y&R created what would be natural comparisons between her performances as Vickie and Katie. Deep talent, solid colleagues, including a terrific production and writing staff, led to many memorable storylines that included great performances which have been delivered through the past thirteen years.

Katie’s most recent health crisis saw her collapse at Bill Spencer’s (Don Diamont) house. Her latest rush to the hospital revealed that medication connected to the famous heart transplant had damaged her kidney’s.

Flo Fulton (Katrina Bowden) was revealed as Storm Logan’s (William deVry) daughter. Katie agreed to accept her newfound niece’s organ donation. That masterfully linked the storyline where Storm surrendered himself in order to donate his heart to his sister.

Bold And The Beautiful Spoilers – What Happens To Bill & Katie Now?

Tom mentioned in her acceptance speech that she’s looking forward to seeing her castmates again. As B&B fans know, the show has resumed production in recent weeks and appears to have resolved an initial testing protocol issue. Buzz indicates that new shows could be on the air by mid to late July.

Fictionally speaking, Katie’s had three-plus months to decide the Batie family’s future. Whether she can find a way to stay tie to Bill, or will cut relationship ties with him will soon be known. Based on Tom’s historic acting credentials, whatever direction her character heads next it’s sure to be compelling.