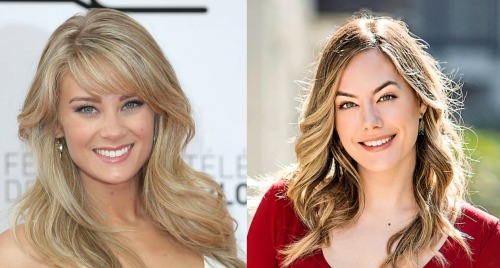 The Bold and the Beautiful (B&B) spoilers reveal that an encore episode has sparked a debate on social media. B&B has suspended production until the COVID-19 aka coronavirus crisis dies down, but they’ve found a way to make their new shows last longer. Like The Young and the Restless and General Hospital, B&B’s started airing classic episodes on Fridays to stretch things out.

On April 10, The Bold and the Beautiful re-aired an episode from 2014, which was back when Kim Matula played Hope Logan. Annika Noelle eventually stepped in as a recast, but seeing Matula again has created as bit of a battle on Twitter and Facebook. Some fans think Noelle is the better Hope, but others still prefer Matula in the role.

Of course, both Matula and Noelle are lovely, talented actresses. This is just about deciding which Hope you like best, so opinions are going to vary. Noelle has arguably been written differently than Matula’s version, which is definitely a factor in all this. Let’s look at what some viewers had to say about this great Hope debate!

“I loved her,” one B&B fan said about Matula’s Hope on Facebook. “She had class. And was an even match for steffy.” Another viewer said, “I was a hope fan back then, she was more feisty, nothing against annika she’s a great actress, they’ve just changed her character.”

Annika Noelle’s material has made this Hope weaker and needier than the old version at times. Hope’s confidence and strength took a hit for the sake of the stories that’ve been told. That could be fixed with better writing, but some fans are still always going to have a soft spot for Matula in the role.

“I love Annika but Kim was Hope when I started watching so she’s special to me,” one Bold and the Beautiful fan said on Twitter. “I like Annika and I think she’s done some amazing acting work on Bold but…this makes me miss Kim M as Hope,” another viewer said while watching this blast from the past.

Naturally, there are some fans who prefer Noelle’s spin on Hope. “I like the new one better,” one B&B watcher said on Facebook. “I like the old one, but I feel that Annika showcases Hopes internal beauty much better, rather than her outer beauty. She’s a great person and we needed to see that.”

Another fan couldn’t choose and suggested that “each actress brings a unique perspective to the role.”

It’s all a matter of preference, so we’ll let you decide! Which Hope do you prefer, Kim Matula’s version or Annika Noelle’s? The Bold and the Beautiful spoilers say there’s much more drama to come on B&B, so we’ll give you updates as other news rolls in.

CDL’s the place to be for exciting info! Be sure to check back often for Bold and the Beautiful spoilers, updates and news posts.