The Bold and the Beautiful Spoilers: Liam and Hope’s Nightmare – Thomas Returns For Douglas 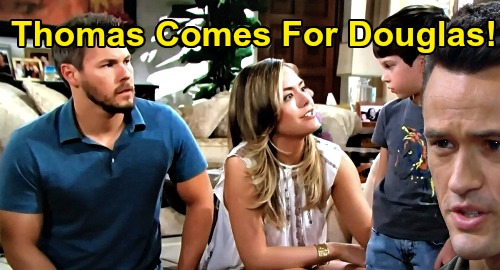 The Bold and the Beautiful spoilers tease that Liam Spencer (Scott Clifton) and Hope Logan (as now played by Annika Noelle) finally are living the life they’ve dreamed of after a long period of strife. Here’s hoping the Lope family, which includes Beth Spencer (Madeline Valdez and River Davidson) and Douglas Forrester (Henry Joseph Samiri), enjoy a period of general peace, as they’ve surely earned it.

As viewers know, B&B shut down production last month due to the COVID-19 virus pandemic. With a bank of recorded episodes, there would have been enough shows to broadcast each weekday through approximately early May.

However, B&B recently began running classic episodes on Friday’s, which included a show from the last decade where Hope (as then played by Kim Matula) was in Paris, France, with Liam and Wyatt Spencer (Darin Brooks). The brothers were romantically interested in her at that time in the plot.

The scene at the intended Thoe wedding was all that Thomas’ detractors wanted and more. He was baited into revealing his true intentions, openly stating in front of his family how he felt about Hope.

Zoe Buckingham (Kiara Barnes) was naturally embarrassed and rightfully angered to have her suspicions confirmed. He had, in fact, been using her all along as part of his scheme to get Hope to remarry him.

Liam hadn’t been able to fully push Hope off her conflicted feelings about Thomas possibly having reformed himself. But thankfully she realized the truth and acted with masterful efficiency when donning the alternate wedding dress he designed for her, with Zoe wearing the other as his backup bride.

Hope and Liam do appear to be each other’s main soul mates. Steam fans would argue that Steffy Forrester (Jacqueline MacInnes Wood) is the better choice for Liam. While they have a child together, Kelly Spencer (Zoe Pennington and Allison Marcia Sweeney), Liam proved that recently living with Steffy didn’t serve to spark his desire to revive Steam.

Liam’s goal was to restore his life with Hope. Now that they’ve remarried, Lope must break a damaging pattern.

It’s understood that Lope will surely encounter other dramas. But if Liam and Hope can avoid allowing Thomas to split them, they should be able to handle other outside challenges.

Thomas has been in hiding since the Thoe wedding fallout. He’s sure to return in the near future. When that happens a clear point of contention will exist, or arise within time.

Atkinson’s character knows that he wasn’t a good father to Douglas. But the last thing Thomas seems likely to accept is Liam adopting Samiri’s character. This projected development would establish a point of conflict upon Thomas’ return and can be avoided by Lope’s combined willpower.