The Bold and the Beautiful Spoilers: Liam & Hope On the Back Burner – Why ‘Lope’ Drama Ignored in New B&B Episodes 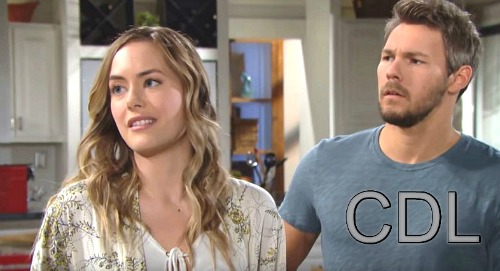 The Bold and the Beautiful (B&B) spoilers reveal that new info’s starting to trickle out about future storylines. There’ll obviously have to be a follow-up on that epic cliffhanger involving Wyatt Spencer (Darin Brooks) at the beach house. Sally Spectra’s (Courtney Hope) storyline with Wyatt and Flo Fulton (Katrina Bowden) will move into the next and perhaps final phase soon.

A storyline for Shauna Fulton (Denise Richards), Quinn Forrester (Rena Sofer) and Brooke Forrester (Katherine Kelly Lang) has also been promised. That’ll undoubtedly involve the Shauna and Ridge Forrester (Thorsten Kaye) marriage that Denise Richards confirmed. Whether that marriage is legal or not, Brooke’s not going to be happy!

Of course, Quinn’s involvement points to more meddling, so she may help Shauna work this angle. There’ll be some fun scheming going on as B&B puts these characters in new situations.

We also know Steffy Forrester (Jacqueline MacInnes Wood) will be working with a new actor and has a big issue-related storyline ahead, so many Bold and the Beautiful are feeling hopeful.

B&B Executive Producer and Head Writer Bradley Bell talked about what’s ahead for all these characters and pointed to some new ones getting in the mix.

However, we want to focus on who Bell didn’t talk about – and that’s Liam Spencer (Scott Clifton). Although Bell praised Annika Noelle’s (Hope Logan) and discussed her Daytime Emmy nomination, there was no mention of plans for Hope either.

Does that mean Liam and Hope will remain on the back burner for a while? Will Hope and Liam mostly be living in family bliss with the offscreen kids? That could be the case since these other stories Bell mentioned should take center stage.

It doesn’t sound like there’s a ton of Liam and Hope drama coming up. If they weren’t even important enough to mention when Bell was previewing stories, that may mean they won’t have much of a story at all – at least not at first.

Naturally, soaps are a revolving door of characters stepping in the spotlight, fading to the background and then stepping into the spotlight again. Hope and Liam will get another moment in the sun, but it may not be coming anytime soon.