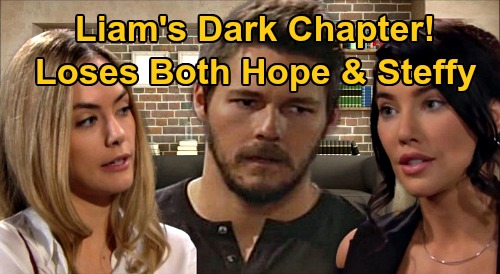 The Bold and the Beautiful (B&B) spoilers tease that Liam Spencer (Scott Clifton) will soon be entering a very dark time. As B&B viewers know, Liam has been happy with Hope Spencer (Annika Noelle) and their family with Beth Spencer (River Davidson and Madeline Valdez) and Douglas Forrester (Henry Joseph Samiri).

But very soon, Liam will make a choice that will have a serious impact on his family life going forward.

According to The Bold and the Beautiful spoilers, Liam will hop into bed with Steffy Forrester (Jacqueline MacInnes Wood) as the two of them are drinking heavily.

Liam will be drowning his sorrows after seeing what he thought was Hope kissing Thomas Forrester (Matthew Atkinson), and he and Steffy will fall into bed together. But then later, Liam will learn that Thomas was actually kissing the Hope mannequin, and Liam will feel awful for betraying his marriage vows to Hope.

And while Steffy and Liam may try to keep their night together a secret for a while, these things always tend to come out on soaps, so chances are both Hope and John “Finn” Finnegan (Tanner Novlan) are going to find out about the affair.

Both Liam and Steffy will probably have an uphill battle trying to explain to their partners exactly what happened, and for Liam, it could cost him his marriage.

In fact, we’d say that Liam stands to lose a LOT in this scenario. Steffy is probably going to go off and try to make things work with Finn, and there’s probably a good chance that Finn will forgive Steffy if she makes a good case to Finn that she really wants him and not Liam. But what about Hope?

Hope will have more to forgive than just Liam sleeping with Steffy.

Of course, Hope will surely be incensed that Liam slept with his ex, but she’ll also be horrified to learn that the reason Liam did it was because he believed that she betrayed him first.

Hope will probably be pretty peeved that Liam just jumped to conclusions and assumed that she kissed Thomas when he knew full well that Thomas had a life-sized Hope mannequin in his apartment.

We suspect that Liam could end up being the big loser in the fallout from his affair with Steffy. Let’s assume that Steffy goes and tries to repair her relationship with Finn, which she’ll probably do.

That will leave Liam in a situation in which Hope could very well divorce him, and he won’t have Steffy to bounce back to…for the first time ever. Liam could end up alone, living with neither of his children.

And this would comport with B&B spoilers that say that Liam will face a very dark time in the coming weeks. It will apparently be bad enough that Wyatt Spencer (Darin Brooks) will need to step in and offer some serious support for his brother.

Liam could end up having a melt-down of his own as he’s faced with getting a new place to live and having limited access to his two daughters.

And then there would be the ultimate insult to injury if Hope ended up growing closer with Thomas while all this is going on. Thomas will be having medical issues of his own, and Hope will be very concerned about him, according to B&B spoilers.

It seems that Liam could lose Hope to Thomas, while simultaneously having lost Steffy to Finn.

That would probably result in some dark times for Liam for sure. We’ll see what happens here, but Liam may have to really do some soul searching and try to figure out how his choices landed him in this terrible place.

Do you think that Liam will lose everything as the result of his bad decisions? Stay tuned to B&B and remember to keep CDL bookmarked for the latest Bold and the Beautiful spoilers, daily episode recaps, and news.