The Bold and the Beautiful Spoilers: Liam’s Marriage Proposal Splits ‘Lope’ – Demands Hope Give Douglas Back To Thomas 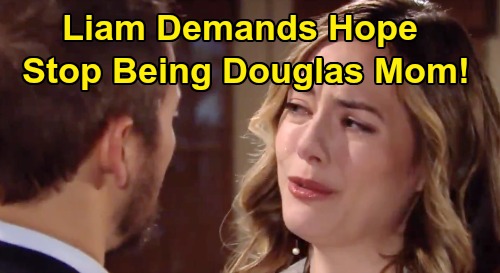 The Bold and the Beautiful (B&B) spoilers tease that Liam Spencer (Scott Clifton) will set the mood for romance. He’ll light candles and bring in some flowers as he prepares a lovely dinner for Hope Logan (Annika Noelle). Liam will really turn on the charm and try to make this night as special as possible.

That’s because Liam will know a storm’s brewing over his marriage proposal and the condition that’ll come with it. Liam will do his best to butter Hope up because she’s not going to like what comes next.

The Bold and the Beautiful spoilers say Liam will ask Hope to marry him, but only if she’s willing to give up legal custody of Douglas Forrester (Henry Joseph Samiri).

B&B spoilers state that Hope will struggle to believe what she’s hearing. She’ll wonder if Liam would seriously consider withholding marriage because of her role in Douglas’ life.

Liam will clarify that Hope can still be there for Douglas, but he’ll want to eliminate the legal ties since it’ll just give Thomas an angle to work. He won’t think they’ll ever be rid of Thomas as long as Hope is Douglas’ legal mother.

In light of Liam’s shocking proposal stipulation, we have to ask… Is it right for Liam to make this demand? Is it fair for Liam to only marry Hope if she gives up being a legal mom to Douglas?

At the same time, Liam doesn’t really seem to be considering Douglas in all of this. First of all, the kid would be crushed if Hope caved in. What’s Hope supposed to say? Sorry, Dougie! Mommy Hope wants to marry Liam more than she wants to be your mommy. B&B buzz is that Hope will be saying ‘NO’ to Liam’s proposal – especially after she catches Steam’s passionate kiss!

It’s doubtful Hope will agree to this, but it seems harsh and selfish for Liam to even push for it. After all, Thomas is – by Liam’s own words – dangerous and insane. He’s repeatedly insisted that Thomas can’t be trusted.

So why does Liam want to leave his godson – the kid he’s supposed to protect for Caroline Spencer (Linsey Godfrey) – solely in Thomas’ hands?

Liam should be first in line to step up for Douglas and make sure he’s got a sane parent. He can do that through the current custody arrangement. Liam knows the wool has been pulled over Ridge Forrester’s (Thorsten Kaye) eyes. From Liam’s perspective, everyone’s getting duped and only he can see the real Thomas.

Shouldn’t that mean Liam should support protecting Douglas instead of feeding him to the wolves? Douglas is just a little kid. Whether you think Thomas is a capable parent or not, Liam certainly doesn’t think so based on his constant criticism.

This is about Liam’s view, which basically involves believing Thomas is a horrible human being and wanting him to raise Douglas alone anyway. Do you think Liam’s proposal stipulation is unfair? Is it right for Liam to expect Hope to bail on Douglas?