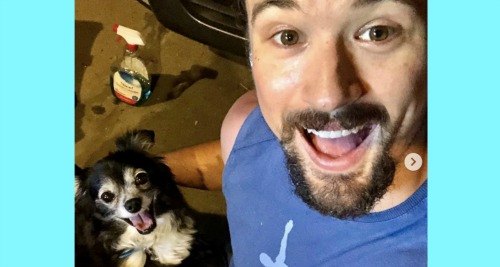 The Bold and the Beautiful (B&B) spoilers has some fun news to pass on about a popular B&B star. Matthew Atkinson, who portrays Thomas Forrester on the CBS soap, recently shared a sweet picture and a video with his fans on Instagram, and his adorable dog stole the show. The sweet little dog was helping his dad out in what appeared to be Matthew’s garage while he was working out and doing some other chores.

The photo showed Matthew smiling big with the adorable pup by his side. And in the short video, the dog pants heavily and excitedly while Matthew looks at the camera and says, “I’m the one working out. Why are you so out of breath? Sympathy Gainz.” Matthew’s caption for the post reads: “Workout, cleaning, and organizing with this guy. #SympathyGainz.”

Matthew’s fans have certainly enjoyed his post. One person commented: “Those smiles are adorable! You and your doggie are #twinning!” And someone else wrote: “Your dog is so cute and special. Love the video.”

We should note that Matthew’s dog has shown up before on his Instagram feed. Earlier this month, Matthew and the dog posed for two pictures – in one picture, he and the dog were stoic, and in the other picture, they were smiling happily. Matthew’s caption for these photos reads: “We weren’t taking any crap, but then we stopped and smelled the roses.”

In a funny turn of events, Matthew’s co-star Katherine Kelly Lang (Brooke Forrester) responded to that post with: “Lol! Perfect!!” A fan then replied to Katherine’s reply, saying, “Aww, you really do like Thomas.” Of course, that fan was referring to the on-screen animosity between Brooke and Thomas.

Speaking of that animosity, it will be interesting to see what kind of headspace Thomas is in once he returns back to his family in Los Angeles. Exactly where Thomas has been since his disastrous wedding to Zoe Buckingham (Kiara Barnes) is unclear, but it’s possible that he’s with his buddy Vinny Walker (Joe LoCicero) or even out of town with his mom Taylor Hayes (Hunter Tylo).

We’ll see what Thomas has been up to since he’s been gone – you never know, he could come back reformed, or he could be more Thomas-like than ever. It could really go either way at this point. But if Thomas is reformed, then would he actually apologize to Brooke? That would be pretty amazing to see if it ever happens.

Of course, it will be quite a while before we see new B&B episodes, since production has been halted due to the COVID-19 situation. But until then, we hope to see more activity on Matthew’s Instagram feed – and more pictures of that adorable dog! Stay tuned to B&B and keep CDL at the ready for all the latest Bold and the Beautiful updates, daily recaps, and news.

Workout, cleaning, and organizing with this guy. #SympathyGainz