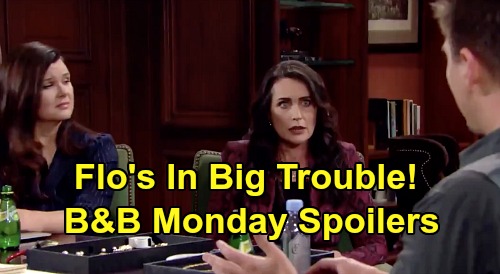 The Bold and the Beautiful spoilers for Monday, April 20, tease that the action is really heating up on the CBS soap. But before we get to that, we have a quick programming note. CBS currently plans to air an encore episode of B&B on Friday, April 17th, so the next new episode that viewers will see will be on Monday, April 20th. And we’ve got the scoop about what you can expect right here.

If Sally’s medical records are accurate and haven’t been doctored by Penny, then the diagnosis should indicate that her presenting physical symptoms were brought on by stress, and NOT a terminal illness.

That’s probably going to enrage Flo, who should put the pieces together pretty quickly and realize that Sally’s alleged terminal illness is just a ruse to get closer to Wyatt Spencer (Darin Brooks). Flo’s going to the pretty peeved.

Well, the Bold and the Beautiful spoilers say that Flo will end up paying Sally a visit on Monday’s episode, and that she’ll play a devious trick on Sally with the goal of exposing Sally as a fraud.

Exactly how Flo will try to trick Sally remains to be seen, but ongoing B&B spoilers indicate that a violent altercation will ensue, with Flo confronting Sally about being a fraud. The Bold and the Beautiful spoilers tell us that Penny will end up knocking Sally unconscious!

Meanwhile, on the new episode of B&B on Monday, April 20th, Wyatt will end up at Forrester Creations talking with Katie Logan (Heather Tom) and Quinn Forrester (Rena Sofer).

It looks like Wyatt will be at Forrester Creations and away from the beach house while everything’s going down with Flo and Sally, so he won’t yet be privy to whatever Flo found on Penny’s laptop.

At any rate, it looks like Wyatt will end up talking things over with his mom and Katie. As B&B viewers know, Wyatt has been feeling terribly conflicted over Flo’s demand that it’s time for Sally to move into a medical facility.

On some level Wyatt agrees with Flo, but on another level, Sally is successfully guilting him about the decision. Wyatt feels torn, and it looks like he’ll reach out to Quinn and Katie for advice.

Of course, at this point, Wyatt will have no inkling that Sally is faking her entire illness as a ruse to get him back. Wyatt will probably just want some advice about what he should do, given that Flo wants one thing and Sally wants something else.

B&B spoilers say that Wyatt will feel even more guilt after he talks with Katie and Quinn, so it looks like the ladies will come down on Sally’s side in this.

Ongoing B&B spoilers say that Wyatt’s conversation with Katie and Quinn will continue beyond Monday’s episode, so it looks like Wyatt will have a lot of feelings to unload.

And it looks like Wyatt may end up leaving the meeting firmly on Sally’s side and ready to reverse his decision to ask Sally to move out. But again, he’ll be completely unaware of what Flo now knows about Sally’s big fraud.

It sounds like a lot of B&B drama is heating up for Monday’s episode! Stick with CDL for all your soap news and updates, and we’ll keep you informed on the latest B&B spoilers and daily recaps as well.