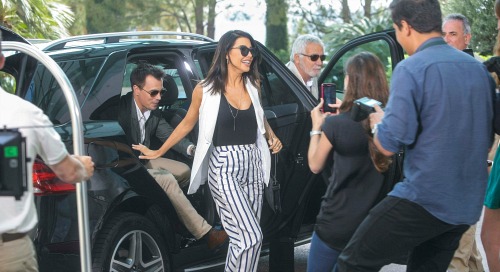 The Bold and the Beautiful spoilers recap for Monday, April 27, reveal that the episode opened with Jacqueline MacInnes Wood (Steffy Forrester) and Scott Clifton (Liam Spencer) introducing the special “Becoming Bold & Beautiful” documentary from their respective homes while in quarantine. Jacqueline and Scott said that they were excited to share the special “Escape to Monte Carlo” week with fans, and that today’s documentary would take viewers behind the scenes.

The documentary started out with Jacqueline narrating and explaining that the cast traveled to Monte Carlo for a 3-day remote location shoot in Monte Carlo in 2016. But that’s not all that Jacqueline and the cast did while they were there – they also attended the Monte Carlo TV festival and walked the red carpet for each evening of the festival.

Interviewed during the documentary was Jacqueline, Scott, Darin Brooks (Wyatt Spencer), John McCook (Eric Forrester), and Rena Sofer (Quinn Fuller). The cast talked about how it was truly an honor to be in Monte Carlo for the festival and for the remote shoot. Viewers got to see footage from a table read that the cast did with Brad Bell (executive producer/writer) on the phone via conference call.

The storyline at the time of the remote shoot was back when Quinn and Eric were a new couple – even before Eric’s family knew about their relationship. Quinn followed Eric to Monte Carlo for the Spencer Summit, and during her visit, Steffy became interested in who Eric’s secret woman was. In addition, Wyatt and Steffy were married at the time, but Steffy was having difficulty in that she couldn’t get Liam off her mind.

Casey Kasprzyk, B&B’s supervising producer, was interviewed during the documentary as well, and he even peeked in on various cast members as they were getting ready for one of their red- carpet events – the opening ceremony of the TV festival, at which Prince Albert of Monaco was present.

As Casey described, the cast and crew had been preparing for the remote shoot for over a month, and Cynthia J. Popp, B&B’s producer/director, worked hard to find just the right spot for Quinn and Steffy’s big finale – when Steffy finally discovered that Quinn was romancing Eric.

The scene then flashed to the cast meeting fans at press events – something that both the cast and fans loved. Jacqueline gushed that she loved the fans, who are so passionate and loyal. And Darin noted that the joy on fans’ faces made him very happy.

Viewers then got to see the crews working behind the scenes to create the fictional hotel that was used in the shoot. There was even a stressful moment when the crew realized that the actor that was hired to play a chauffeur in a scene didn’t know how to drive! But after 6 minutes, the actor had taught himself to drive, and the scene could continue.

Viewers also got to see how the crew shot footage of Darin by the ocean, which they later used to make it seem like Wyatt was reacting to Steffy’s photo shoot aboard the Stella Maris. Turns out, the footage of Steffy was taken at an earlier time. Darin joked about how he was reacting to basically nothing as they shot the footage.

Day 1 of the remote shoot went well, and Day 2 had to be quick because the cast had cocktails scheduled with Prince Albert at the palace later that evening. But on Day 2, it rained big time, so ultimately the decision was made to incorporate the rain into the shoot.

You won’t want to miss Part 2 of “Becoming Bold & Beautiful,” so tune in Tuesday, April 28! Stick with the CBS soap and be sure to keep CDL at the ready for the latest B&B news and updates. We’re here for you with all the latest!