The Bold and the Beautiful Spoilers: Monday, April 6 Update – Steffy & Zoe Puzzled By Sally Weirdness – Escobar Lashes Out at Flo 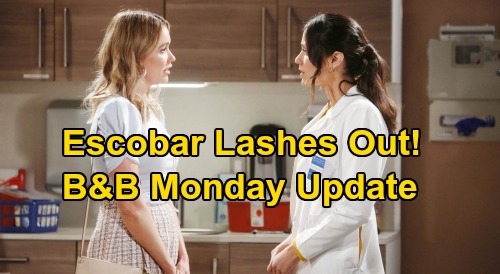 The Bold and the Beautiful (B&B) spoilers update for Monday, April 6, teases that that Zoe Buckingham (Kiara Barnes) and Steffy Forrester (Jacqueline MacInnes Wood) will spend some time catching up. There’ll be a lot to cover in this heart-to-heart – most likely starting with all the recent wedding drama.

B&B viewers know Thomas Forrester (Matthew Atkinson) was manipulating his bride to get the bride he really wanted. Thomas hoped to marry Hope Logan (Annika Noelle), so his whole romance with Zoe was a sham.

Although Zoe got hurt, at least she’s free now and can focus on her career. True love may come along as well, which Steffy might reassure Zoe of on Monday.

The Bold and the Beautiful spoilers say there should also be some fashion talk. In the coming weeks, B&B fans can expect Steffy and Zoe to work on the fall line together.

It’ll be nice to see them collaborate on this collection and perhaps serve as sounding boards for each other. Despite their issues of the past, Zoe and Steffy should make a great team in the present.

During this chat, the topic of Sally Spectra’s (Courtney Hope) illness will come up, too. Zoe will be a bit weirded out by Sally and Wyatt Spencer’s (Darin Brooks) living arrangements.

Zoe will certainly feel sorry for Sally, but she may suggest this has to be tough for Flo Fulton (Katrina Bowden). “Dying” Sally’s living with Flo’s boyfriend, so there are some strange layers here.

Steffy will get where Zoe’s coming from, but she may think everyone has to do what’s best for Sally. Anything that keeps Sally happy and comfortable is a good thing – at least since Steffy believes Sally’s got a terminal illness.

Speaking of that illness, Flo will worry that Sally’s not getting enough help to handle it. She’ll wonder what else can be done, so she’ll pay Sally’s doctor a visit.

Dr. Penny Escobar (Monica Ruiz) will be visibly unsettled from the get-go, which is sure to raise red flags. Flo will assure Dr. Escobar that she’s not looking for confidential information.

She’ll just want some strategies to help Sally manage her illness better. Flo will point out that she’s on Sally’s side along with Wyatt, but Penny will lash out and refuse to offer any tips at all.

The Bold and the Beautiful spoilers say this encounter will become incredibly tense, so Penny will be more nervous than ever. The harder Dr. Escobar tries to keep this secret, the more she’ll slip up!

We’ll offer updates as other B&B news rolls in. Do you think Penny will crack sooner or later? Don’t forget to stop by CDL frequently for other Bold and the Beautiful spoilers, news and updates.