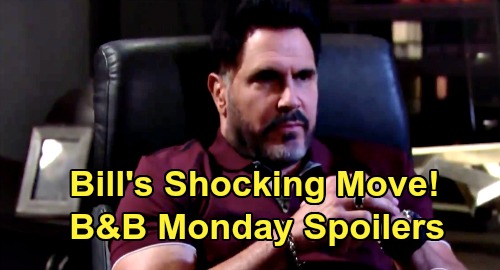 The Bold and the Beautiful spoilers for Monday, August 31, tease that Ridge Forrester (Thorsten Kaye) will have some serious thinking to do. As B&B viewers know, Ridge just had a major blow up with Brooke Logan (Katherine Kelly Lang), during which he blasted Brooke for continuing to love Bill Spencer (Don Diamont) after everything that Bill has done.

Brooke didn’t quite seem to “get” that her declaration of love for Bill had changed something permanently in Ridge. Well, on Monday’s episode of B&B, Ridge will make a decision about his future, and it certainly looks like he’ll be set on a future without Brooke.

When viewers last saw Ridge on Friday’s episode, he was flashing back to everything that’s gone on recently – his reunion with Brooke, witnessing the kiss between Brooke and Bill, marrying Shauna Forrester (Denise Richards), and then hearing Brooke declare her never-ending love for Bill.

Ridge was also holding those annulment papers and trying to decide what to do.

It certainly appears that Ridge is going to realize that he needs to go on without Brooke and give his marriage with Shauna a try.

Ongoing spoilers for later in the week of August 31 say that Shauna will do her best to be a supportive and caring wife to Ridge, which indicates that Ridge is going to put Brooke in his rearview mirror and go full steam ahead with Shauna.

Meanwhile, on the new episode of B&B on Monday, August 31, Bill will apparently decide that he needs to revisit his previous conversation with Brooke.

As B&B viewers know, Bill totally poured out his heart to Brooke, saying that he had repressed his feelings for her to protect Katie Logan (Heather Tom) and Will Spencer (Finnegan George). Well, now that Bill and Katie are kaput for good, it seems that Bill will go back to Brooke and want to be there for her.

Of course, this is a typical Dollar Bill move, and now that he knows that his relationship with Katie is off the table, he’s going to go to Brooke and make a big push for them to be together again.

According to The Bold and the Beautiful spoilers, Bill will make a proposition to Brooke to be her knight in shining armor again, but how will Brooke respond to this? Brooke is probably still going to be thinking that she’s got a shot to work things out with Ridge at this point, so she may not be so keen on Bill’s plan.

But then again, Brooke does have a weak spot when it comes to Bill, so they may talk at length. And if they do, then Bill might reveal that his discussion with Quinn Forrester (Rena Sofer) precipitated his visit to Brooke’s house and led to him declaring his love for her.

That might actually give Brooke a little more fuel against Quinn and Shauna going forward. We’ll see what happens here, but we suspect that Brooke will need someone to turn to, and she could become more receptive to Bill’s advances.

Monday’s episode is shaping up to be fantastic, so don’t miss it! We’re here for you with all the latest soap spoilers and hot news, so stick with CDL. We’ve got you covered with ongoing B&B updates – you can count on us!