The Bold and the Beautiful Spoilers: Monday, February 24 – Hope Barges In On Thomas & Zoe’s Intimate Moment – Brooke’s Deal with Ridge 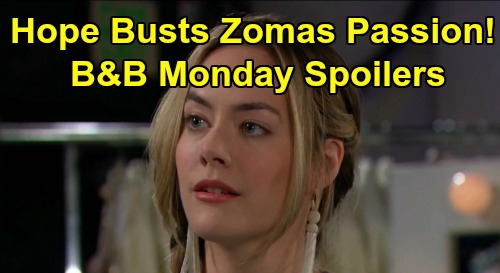 The Bold and the Beautiful (B&B) spoilers for Monday, February 24, tease that Thomas Forrester (Matthew Atkinson) will prepare to celebrate his recent engagement. His proposal was really just for show, but he managed to convince Zoe Buckingham (Kiara Barnes) he loves her and wants a solid future together.

With that in mind, Zoe and Thomas will share an intimate moment. It looks like Thomas will rev up the romance and try to make Zoe feel special. After all, she’s his fiancée now!

Thomas truly wants to be with Hope Logan (Annika Noelle), but he believes selling this lie is his best strategy. He doesn’t love Zoe, but he feels he’s so close to tugging at Hope’s heartstrings enough to win her over.

Thomas should be more convinced than ever now that Douglas Forrester (Henry Joseph Samiri) is so frantic. Hope and Douglas’ latest conversation was certainly a heartbreaking one. It also offered a bit more insight into Douglas’ mindset and truly highlighted Thomas’ cruelty.

Douglas explained that his first mommy said she would always be there for him, but that wasn’t true. Caroline Spencer (Linsey Godfrey) died and now Douglas is terrified that he’ll lose Hope as well.

Douglas’ confession seemed to hit Hope hard, so that could play a role in what comes next. She’ll barge in on that intimate moment we mentioned knowing full well what she’s doing.

It sounds like Hope will interrupt as Thomas and Zoe are about to make love. She’ll probably worry that the further Thomas takes this, the more upset Douglas will become.

Zoe and Thomas are getting in pretty deep now – at least from Hope’s perspective. She may not be ready for a future with Thomas, but she’ll realize his current path is taking a terrible toll on Douglas.

Thomas is bound to assume he’s another step closer to his goal – and maybe he is. He’ll keep working any angle he has to if it means locking in Hope like he wants.

Meanwhile, B&B fans can expect another Thomas faceoff for Ridge Forrester (Thorsten Kaye) and Brooke Forrester (Katherine Kelly Lang). They’ve had this confrontation so many times, but it’ll actually have a different outcome for once.

The Bold and the Beautiful spoilers, updates and news point to a shocking offer from Brooke. She’ll be sick and tired of this same old fight, so she’ll be willing to negotiate. Brooke will contend that if Thomas can truly move on with another woman, she’ll forgive everything and let go of the past.

Whether that woman is Zoe or someone else, it really won’t make any difference to Brooke. As long as it’s not her daughter, Brooke simply won’t care. Her only goal here is protecting Hope, so she’ll tell Ridge that’s what it’ll take.

Brooke has to see Thomas prove his commitment, which Ridge won’t have a problem with. He’ll likely think Thomas’ upcoming wedding to Zoe will do the trick.

Although Ridge battles some initial suspicions about Thomas’ proposal, he heard what he needed to hear from his son. Ridge will assure Brooke that Thomas is all in with Zoe. He’ll feel confident Brooke’s terms will be met, but The Bold and the Beautiful spoilers say Brooke will remain doubtful.

Another exciting B&B episode’s on the way. CDL will have all the latest updates and news as other Bold and the Beautiful spoilers roll in.