BY Heather Hughes on January 20, 2020 | Comments: one comment
Related : Soap Opera, Spoiler, Television, The Bold and the Beautiful 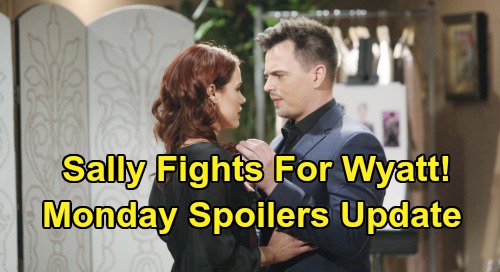 The Bold and the Beautiful (B&B) spoilers update for Monday, January 20, tease that Quinn Forrester (Rena Sofer) will seethe over Brooke Forrester’s (Katherine Kelly Lang) latest attack. Brooke feels like Quinn and Shauna Fulton (Denise Richards) have been conspiring to undermine her marriage, but now she’s trying to undermine Quinn’s marriage as well.

Of course, Quinn won’t sit back and accept that. In Monday’s B&B episode, Quinn will make a vow that sounds awfully dangerous. She’ll promise that Brooke’s going to pay the price for all her marriage meddling.

Quinn will plot her revenge, but that could mean actually putting her marriage at risk. Eric Forrester (John McCook) isn’t going to like it if Quinn reverts to her wicked ways!

While Quinn fumes and schemes, The Bold and the Beautiful spoilers say Wyatt Spencer (Darin Brooks) will move forward with a challenging task. Unfortunately, Sally Spectra (Courtney Hope) will make it even more challenging since she won’t really understand what Wyatt’s getting at.

Wyatt was planning to break up with Sally, but he found her waiting to seduce him with a hot evening instead. As he pivots the conversation to their split, Sally will struggle to grasp it.

Wyatt will try to find a way to let Sally down gently, but she’ll refuse to truly listen to the words. Sally will be desperate to hang onto this romance, so Wyatt’s breakup efforts will be tough to pull off.

Nevertheless, Wyatt will keep at it and hope he can make Sally see why this is for the best. His feelings for “Flo” Fulton (Katrina Bowden) aren’t going away. Wyatt wants to build a life with Flo, so there’s no point in wasting any more of Sally’s time.

Wyatt will think they need a clean break so they can both find the right path – and he believes his path is with Flo, not Sally.