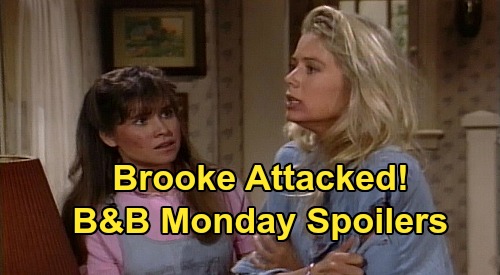 The Bold and the Beautiful spoilers for Monday, June 8, tease that viewers will see the very first episode of B&B that aired on March 23, 1987. The episode will begin in the Forrester Creations design office, with Ridge Forrester (Ronn Moss) unhappily looking at design sketches. Ridge will move through the back door into the bustling backstage area where Eric Forrester (John McCook) will be working feverishly with models as they prepare to take the runway in the showroom.

But Ridge will contend that the line is flat, and that something is missing – it needs more sensuality. Thorne will retort that Ridge is the VP, and if he has problems with the fall/winter collection, then this is a bad time to bring it up.

Ridge will then glance over at Eric with Margo Maclaine (Lauren Koslow) wondering if they’ve ever made it together. A woman will then approach Ridge saying he has a phone call, and Ridge will go to the phone, where he’ll talk with Caroline Spencer (Joanna Johnson), who will ask him if they’re still on for tonight.

Ridge will head to a back room, where he’ll take a call from Bill Spencer, Sr. (Jim Storm). Bill will want Ridge to come see him immediately, but Ridge will refuse. Bill will say that he’ll come to see Ridge. Ridge won’t look thrilled about this.

Next, at Brooke Logan’s (Katherine Kelly Lang) family home, Katie Logan (Nancy Sloan) will look at herself and her acne unhappily in the mirror. Katie will pick up a magazine with a handsome actor on it, then fantasize about the actor telling her that she’s beautiful and kissing her.

Suddenly, Brooke will burst in the front door with ripped clothes and a bruise on her face.

Katie will rush to Brooke, asking her what happened. Brooke won’t want to talk about it, and she’ll be visibly upset but quiet. The doorbell will ring, and Katie will look out the door saying there’s a police car out front.

It will be Dave Reed (Stephen Shortridge), who will come in saying that he just heard what happened. Brooke will send Katie upstairs so she can talk with Dave privately.

Back at Forrester Creations, Eric will shoo away the remaining photographers after the fashion show ends. Eric will be happy with the showing, and he’ll talk with Ridge, saying “Thorne told me your reaction to the line, and how much you liked it.” Eric will tell from Ridge’s reaction that he didn’t actually like it.

Ridge and Eric will then disagree about the line. Ridge will way that he likes to be turned on by women – all guys do. But Eric will maintain that Ridge still hasn’t learned the psychology of women – for most women, sensuality isn’t about showing skin but is a state of mind. Plus, Eric will say that it’s women who buy the vast majority of what Forrester Creations sells.

Eric will go, and a woman will let Ridge know that Bill is there to see him. Ridge will go to the design office, where Bill will be waiting for him. Bill will tell Ridge that he doesn’t want him to see Caroline anymore.

Ridge will ask where this is coming from, and Bill will reveal that he knows that Ridge is seeing other women besides Caroline. Ridge will say that Caroline knows it, too.

Back at the Logan house, Dave will tell Brooke that there was a witness to her attack and that dispatch had called him. Dave will need to know everything that happened, and Brooke will proceed to tell him that she was on her way back from campus when a guy next to a blue van asked her for directions.

But the van door burst open and another guy appeared, grabbing Brooke and trying to drag her in the van.

Brooke will describe how she fought back and kicked one of the guys, causing him to scream which attracted attention. The two guys then drove off and Brooke escaped.

Caroline will then put a stop to the kissing, as it is getting too passionate. Ridge will tell Caroline that he wants her tonight, but Caroline will say no, because she will only be with the man who will marry.

It sounds like Monday’s encore episode will be great (and historic!) so be sure to tune in to the CBS soap. We’ll give you updates as B&B news comes in. Remember, keep CDL bookmarked for the latest Bold and the Beautiful updates and news.