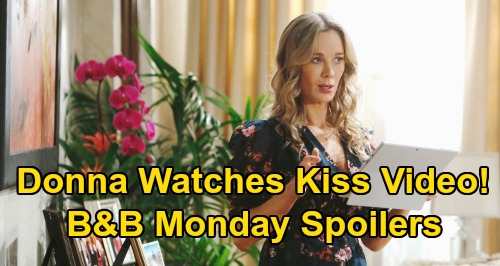 The Bold and the Beautiful spoilers for Monday, March 23, tease that Flo Fulton (Katrina Bowden) will pay Sally Spectra (Courtney Hope) a visit. Against Katie Logan’s (Heather Tom) advice, Flo will be determined to see Sally and set things straight. As B&B viewers know, there are supposedly no more secrets among Wyatt Spencer (Darin Brooks), Sally, and Flo, since Sally told Wyatt the “truth” that she was dying.

Sally’s “confession” to Wyatt in turn led Wyatt to confess to Sally that he and Flo weren’t really broken up, but then he seemed to convince Sally that he wanted to be there for her and that she needed to stay put at his place. Sally ultimately agreed to this, and she allowed Wyatt to continue to care for her so that they could face her final days together.

All that being said, it’s also the case that Sally indicated to Dr. Penny Escobar (Monica Ruiz) that she wasn’t really dying, which adds another layer to this drama. Well, when Flo goes to visit Sally on Monday’s episode, she’ll of course have no idea that Sally’s terminal condition is actually a ruse.

Flo will just want to smooth out the differences between them, and she’ll probably want to let Sally know that she supports Wyatt being there for her in her final days.

Of course, since B&B viewers don’t have a good grip on what sort of game Sally’s playing here, it’s hard to say how she’ll respond to Flo’s visit. But chances are, Sally will probably play along as if she’s dying.

It should be interesting to watch the interaction between these two play out, knowing what we now know about Sally’s real status. Will Flo start to get a clue that Sally faked her illness just to steal Wyatt?

Meanwhile, on the new episode of B&B on Monday, March 23, it appears that Donna Logan (Jennifer Gareis) will be the next person to lay eyes on the video of Brooke Forrester (Katherine Kelly Lang) and Bill Spencer’s (Don Diamont) kiss. According to B&B spoilers, Donna will be shocked when she inadvertently sees Brooke betraying both Ridge Forrester (Thorsten Kaye) and Katie.

Well, Donna will be horrified when she sees the video footage, and according to B&B spoilers, she’ll want some answers from Brooke. Brooke is going to be terribly upset when she sees the footage herself, and she’s going to have some serious questions to answer from Donna, who will want to know how she could do this to Katie again.

According to ongoing B&B spoilers, Donna and Brooke will then become determined to remove the video from the digital feed, but it doesn’t look like it’s going to be so simple. They’ll apparently scramble during the week of March 23-27 as they try to get rid of the evidence before Ridge or Katie is the wiser. Unfortunately for Brooke, it doesn’t look like they’ll be successful in that endeavor.

Monday’s episode of B&B sounds pretty exciting, so be sure to stay tuned. Remember, CDL is your place for the latest B&B news and spoilers. Be sure to check back with us often, and we’ll keep you informed about the latest Bold and the Beautiful updates.