BY hellodrdavis on March 6, 2020 | Comments: 2 comments
Related : Soap Opera, Spoiler, Television, The Bold and the Beautiful 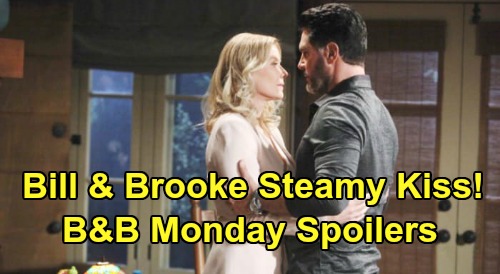 The Bold and the Beautiful spoilers for Monday, March 9, tease that Hope Logan (Annika Noelle) will reel from the tale that she’s just heard from Steffy Forrester (Jacqueline MacInnes Wood). As B&B viewers know, Liam Spencer (Scott Clifton) has just summoned Hope to Steffy’s house, and Steffy has just told Hope that Thomas Forrester (Matthew Atkinson) orchestrated the kiss between her and Liam, and that she got roped into his devious plan.

Well, Hope is initially going to be pretty peeved with Steffy, to say the least. Hope was under the impression that all the manipulation and dirty tricks between herself and Steffy was in the past, so she’s probably going to let Steffy have it. According to B&B spoilers, Steffy will go on to offer a heartfelt apology to Hope for what she did and for how she got sucked into Thomas’ terrible scheme.

And it looks like after Hope processes her anger a bit, she’ll realize that there’s something more important here than holding onto her anger toward Steffy – there’s Douglas Forrester (Henry Joseph Samiri) to think about. According to B&B spoilers, Hope will find herself realizing that Liam and Brooke Forrester (Katherine Kelly Lang) have been right about Thomas this whole time, and that he’s still obsessed with her.

Well, once Hope comes to terms with the fact that Thomas is still manipulating to get her, and that he’s actually using both Douglas and Zoe Buckingham (Kiara Barnes), she’s going to be furious with Thomas and highly protective of Douglas. She’ll want to shelter Douglas from Thomas’ manipulation, and it looks like she’ll be itching to expose Thomas for the liar and manipulator that he is.

Ongoing B&B spoilers for the rest of the week of March 9th-13th say that Hope, Liam, and Steffy will together hatch a plan to “out” Thomas once and for all, so it looks like Hope’s not going to hold onto her anger toward Steffy for long. Rather, they’ll all want to do the right thing by Douglas and stop Thomas from manipulating him any further.

Meanwhile, on the new episode of B&B on Monday, March 9, Brooke will find herself in a complicated situation. As B&B viewers know, she’s fresh from a conversation with Ridge Forrester (Thorsten Kaye), during which they talked about their possible future. Things have certainly been strained between Brooke and Ridge for a while now, and they’ve even signed divorce papers, but they haven’t totally given up on their marriage.

Ridge hasn’t filed those divorce papers yet because he’s really hoping that Brooke will come around one it’s crystal clear that Thomas has moved on with his life. And given that Thomas is planning on marrying Zoe really quickly, Ridge has hope. But on Monday’s B&B episode, Brooke will do something that could ultimately threaten any chance she has of reuniting with Ridge.

According to the Bold and the Beautiful spoilers, Brooke will have a conversation with Bill Spencer (Don Diamont). Exactly what brings these two together remains to be seen, but they might find themselves on the same page when it comes to Thomas. Neither of them is a fan of Thomas, and they could bond over that sentiment.

At any rate, in an apparently unplanned moment, Bill and Brooke will find themselves kissing. It will be something that neither of them expects to happen, but it will happen big time, and it looks like it will be a pretty passionate kiss that will linger in their minds for days to come. This is a big development, given that Bill and Brooke have done this to Katie Logan (Heather Tom) before, with disastrous consequences.

Of course, if word ever got out about the kiss, it could completely implode Bill and Katie’s relationship, and it could put a big end to a Ridge and Brooke reunion. And for that reason, Bill and Brooke will probably want to keep the whole thing quiet and just between them. But will they be able to do that?

It appears that we’re in for a lot of great B&B drama on Monday’s episode! Be sure to stay tuned to the CBS soap, and we’ll be sure to give you updates as news comes in. And check back with CDL for all your latest Bold and the Beautiful spoilers, news, and recaps.