BY hellodrdavis on May 4, 2020 | Comments: Leave Comments
Related : Soap Opera, Spoiler, Television, The Bold and the Beautiful 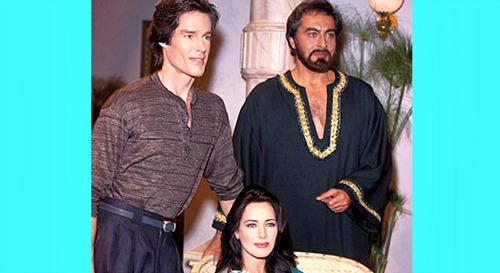 The Bold and the Beautiful spoilers recap for Monday, May 4, reveal that today’s encore episode originally aired on September 30, 1994. Katherine Kelly Lang, who portrays Brooke Logan Forrester, introduced the episode by thanking fans for joining them for B&B’s “Epic Wedding Week.” Katherine said that today’s wedding is near and dear to her heart, as it is Brooke and Ridge Forrester’s (then portrayed by Ron Moss) first wedding.

The episode began in the middle of Brooke and Ridge’s wedding ceremony on the beach in Malibu. The officiant said that today was a day of transformation, and together Brooke and Ridge would become a family.

Then the officiant asked if there was anyone who objected to this union, and Stephanie Forrester (Susan Flannery) looked irritated, while James Warwick (Ian Buchanan) looked completely unnerved.

Brooke and Ridge exchanged rings, with Brooke saying; “My dear Ridge, our love has been both stormy and serene. The last seven years, we have survived the changing tides and have returned to each other at last. Today, I pledge to you my adoration under dark skies and clear. And like the sea, I will embrace you and sustain you for as long as we both shall live.”

Ridge then gave his vows, saying: “Brooke, our love has been like the mountain above us. Over the years it has been both drenched in sunlight and shrouded in fog, and though sometimes hidden, it’s always been there, undeniable, very strong. I am the foundation that you can build your future upon. My love for you is as solid and enduring as the beautiful mountainside and today I pledge to shelter, to support, and to encourage you for as long as we both shall live.”

The officiant then pronounced Brooke and Ridge as husband and wife, and they kissed happily as the wedding march played and everyone stood. Up on a cliff, Mustafa watched the ceremony solemnly.

He received a call from Prince Omar Rashid (Kabir Bedi), and he told Prince Omar that Ridge had married Brooke. Prince Omar wasn’t happy, and he turned to his associate and said, “It is too late…Ridge Forrester is married.”

Meanwhile, in another area of the palace, Taylor Hayes Forrester (Hunter Tylo) looked at a photo of Ridge in a newspaper and lamented that he needed to know that she was alive.

Later, Taylor argued with a servant named Yasmin, saying that Prince Omar had deliberately deceived her. Yasmin said that the prince was a man of great compassion and integrity, but Taylor disagreed, saying that she wasn’t a possession and that she should be free to leave when she chooses.

Yasmin tried to explain that the prince had been publicly humiliated by Taylor’s refusal, and that Taylor needed to give him a chance to explain. But Taylor insisted that she needed to be with her husband and go home immediately.

Back at the wedding reception, Brooke and Ridge posed happily for pictures with their family, although Stephanie didn’t look particularly happy in the photos. Later, Brooke found James by the water, and he sadly congratulated her for the dramatic wedding.

Brooke told James that she knew this wasn’t easy for him, and he said that as long as Brooke was happy, that’s all that mattered. Brooke took off, and James looked after her.

Brooke spoke briefly with Connor Davis (Scott Thompson Baker) and thanked him for attending, then Ridge and Storm Logan (Ethan Wayne) walked up and Ridge said that he needed Brooke for a while – he had a surprise for her.

Brooke said that she had waited seven years for this day to happen, and that she felt so wonderful. Ridge said that they had another fifty years ahead of them, and that when he took those vows, he knew that they were doing the right thing.

Brooke said that the last two months have been like a wonderful dream, and she and Ridge kissed happily, then rode their horses back up the beach to the reception.

That concluded the episode, and Katherine Kelly Lang returned, and said, “And Brooke and Ridge lived happily ever after…if only.” Katherine said that it was so nice to have the fans share in this special episode with them, and she said, “We’ll see you tomorrow, and stay safe.”

That was a great encore episode, and there’s more coming tomorrow during “Epic Weddings Week” on the Bold and the Beautiful. Stick with the CBS soap and don’t forget that CDL is your go-to source for the latest B&B updates.