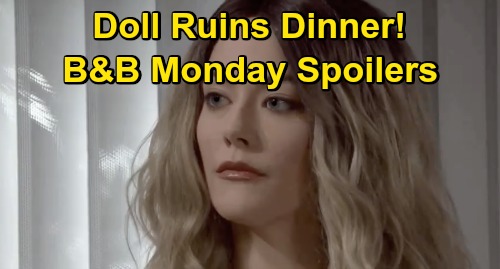 The Bold and the Beautiful spoilers for Monday, November 23, tease that Thomas Forrester (Matthew Atkinson) will continue to struggle with his hallucinations as he tries to enjoy some family time with Hope Spencer (Annika Noelle) and Douglas Forrester (Henry Joseph Samiri).

As B&B viewers know, Hope and Douglas are over at Thomas’ apartment for an impromptu dinner, and the mannequin is talking to Thomas from inside the box where she’s stashed.

Earlier, before Hope and Douglas arrived, the mannequin was once again instructing Thomas to get rid of Liam Spencer (Scott Clifton). Thomas was very upset by the mannequin’s demand, as well as with her demand that he tell Hope how he really feels about her.

Now Thomas is all confused, and he’s probably going to have to work hard to fight off the mannequin’s demands as he tries to enjoy a nice evening with Hope and Douglas.

B&B spoilers say that the mannequin will come to life for Thomas during the evening, so Thomas might imagine the mannequin walking around and emerging from that box, which should be pretty terrifying.

Meanwhile, on the new episode of B&B on Monday, November 23, Liam and Steffy Forrester (Jacqueline MacInnes Wood) will continue their conversation over at the cliff house.

As B&B viewers know, Steffy and Liam attended a beach party for one of Kelly Spencer’s (Colette and Avalon Gray) friends, and now they’re back at the house gushing over how much Kelly has grown and her accomplishments.

But of course, since Liam’s involved, the conversation has turned back to Thomas and how Liam doesn’t trust him. This is going to be a non-starter with Steffy, who is convinced that Thomas is working on himself and that he’s put his terrible past behind him.

For Steffy, the proof is in the pudding – Thomas has made great strides as a designer and his demeanor has been subdued and he’s been contrite.

But of course, Liam doesn’t see it. Rather, Liam sees all of Thomas’ good behavior as just another part of his ruse to convince everyone that he’s changed. Liam has been burned one too many times by Thomas, and he’s just not going to believe that Thomas is “better,” nor that he can even get better.

It looks like Steffy and Liam will end up agreeing to disagree where Thomas is concerned.

Monday’s episode of B&B sounds terrific, so be sure to tune in! In the meantime, we’ll keep you updated on any new B&B news. And as the weekend progresses, keep CDL at the ready so you don’t miss any of the latest Bold and the Beautiful spoilers, updates, or news.