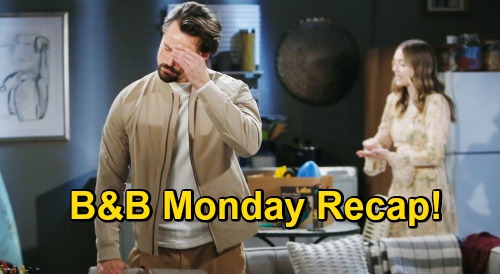 The Bold and the Beautiful spoilers recap for Monday, November 23, reveal that Liam Spencer (Scott Clifton) and Steffy Forrester (Jacqueline MacInnes Wood) talked at the cliff house about how great the beach party for Kelly Spencer (Avalon and Colette Gray) was.

Liam went to check on Kelly in the bedroom, and Steffy gazed at the portrait on the wall and smiled.

When Liam returned from Kelly’s room, he mentioned how much he enjoyed checking in on both his girls. Talk then turned to Douglas Forrester (Henry Joseph Samiri), which led Liam to make a remark about Thomas Forrester (Matthew Atkinson).

Steffy and Liam bickered about whether Thomas was still the same dangerous guy who was fixated on Hope Spencer (Annika Noelle).

Liam said that Hope and Steffy didn’t see how Thomas manipulated everything, and Steffy got exasperated. Steffy said that she was well-aware of Thomas’ mistakes, but that he deserved another chance.

Steffy wondered if they could talk about something else – ANYTHING else – but Thomas. Liam called a truce, and he took the opportunity to gush about his two awesome daughters.

Steffy and Liam thought that it was amazing that they had a nice extended family that included Douglas. Steffy said that it showed that they could do anything for the sake of the children.

Liam said how much he respected and admired Steffy, and Steffy smiled big, noting that Kelly’s the reason she’ll never regret any moment they shared together.

Much to Steffy’s chagrin, Liam once again mentioned Thomas and his ongoing obsession with Hope. Steffy insisted that Thomas didn’t have ulterior motives and that he wasn’t still obsessed with Hope. Liam disagreed, wondering whether Thomas had really changed.

Meanwhile, at Thomas’ apartment, Thomas happily watched Douglas and Hope playing and coloring at the table. Suddenly, the mannequin talked to Thomas from inside her box. “Thomas, this is the night for you and Hope.

Are you ready?” the mannequin said. “The time is now, Thomas, don’t waste it. Everything you want is right in front of you. Make a move.”

“Stop it!” Thomas whispered in the direction of the mannequin box. Hope and Douglas wondered who Thomas was talking to, and Thomas covered by saying he was just talking to himself.

Douglas asked whether it was fun for Hope and Thomas to work together, and they said that it was. Douglas went off into the other room to play video games, and Hope offered to let Thomas have Douglas over more if he wanted.

Thomas appreciated Hope’s offer, and he noted that Hope was kind of his barometer for change. “When you acknowledge and recognize the changes in me, it means something,” Thomas said.

Thomas then asked Hope to stay for dinner, and Douglas reappeared, saying that he really wanted to have dinner with his mommy and daddy.

After a little cajoling by Douglas, Hope said she was super hungry and would love to eat with them. Douglas was thrilled, and he and Hope set the table together while Thomas watched.

Paris gushed about the tour, and she and Zende talked about her social work career. Paris asked to see some of Zende’s designs, and he joked with her, wondering if she was a design spy.

After a little flirting, Paris looked at some of Zende’s sketches, noticing that she could see Zoe Buckingham (Kiara Barnes) in the model. Zende covered, saying that Zoe was the face of the line.

Zende and Paris enjoyed getting to know each other and playfully flirting, and they were all smiles with each other.

That was a terrific episode of B&B, and there’s much more coming tomorrow, so stay tuned! Stick with the CBS soap and don’t forget to check CDL regularly for the latest Bold and the Beautiful spoilers, daily episode recaps, and news.