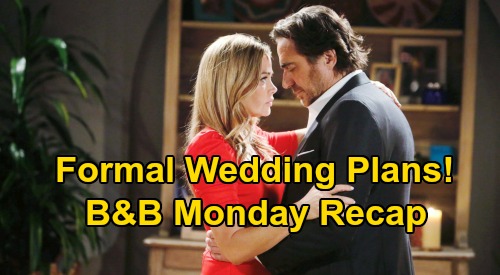 The Bold and the Beautiful spoilers recap for Monday, September 14, reveal that Quinn Forrester (Rena Sofer) continued to try to persuade Ridge Forrester (Thorsten Kaye) to have a formal wedding with Shauna Forrester (Denise Richards).

Ridge wondered why Quinn was encouraging this second wedding, and he asked if something else was going on. Quinn deflected, saying that Shauna deserved a special wedding, and that it should be a family occasion.

Ridge said that he needed to talk to Shauna about it, but that he didn’t want to hurt Brooke needlessly. Quinn looked happy, and Ridge left for the office.

Later, Quinn talked with Shauna via phone, and Shauna shared that Ridge had called her. Quinn told Shauna that the big picture was that Ridge is at least considering having a second ceremony.

Quinn said that if the second ceremony happens, then all of Shauna’s guilt about how the first ceremony went down would go away. Quinn said that they’d have a wedding that nobody – especially Brooke – would forget.

At the Forrester CEO office, Brooke, Katie Logan (Heather Tom), and Donna Logan (Jennifer Gareis) continued their conversation. Katie was curious about how Bill Spencer (Don Diamont) showed up when Brooke was trying to get through to Ridge, and she said it was clear why Bill showed up.

Brooke noted that Bill did seem overly concerned about her at the time, and that Quinn had a smug look on her face.

Katie wondered whether Quinn called Bill, and Brooke didn’t know, but she did say that Bill’s presence stopped the progress that she was making with Ridge. Donna thought that Katie and Bill could make progress too, but Katie said that there was no “her and Bill” and that it was over.

Katie thought that Brooke should be patient, and that Ridge would come back to her. Brooke hoped so.

Wyatt mentioned something about Bill being torn between Katie and Brooke, and Bill said that he realized that Katie’s big freeze-out after his kiss with Brooke refueled his attraction to Brooke. Bill indicated that he wanted Katie back, and that kissing Brooke was wrong.

Justin wondered if this newfound desire for Katie was just because Brooke was unavailable, and Bill said that he wanted Katie to take him back. Suddenly, Bill declared that he had to go to a meeting, but Justin noted that there were no other meetings on the books for the day.

Bill gave Justin the rest of the day off, and he said he had somewhere to be.

A short time later, Bill showed up in the Forrester design office, where Katie was working. “You take my breath away,” Bill said from the doorway. Katie noted that she’d heard that before.

Bill said that he missed Katie, and that he’d never stop being sorry for ruining their life together. After some talk about Will Spencer (Finnegan George), Bill again said that he regretted screwing things up.

Back in the Forrester CEO office, Ridge was sketching when Brooke walked in. Brooke immediately launched into a tirade about Quinn’s scheming, but Ridge stopped Brooke, saying that he didn’t want to talk about any of that.

Bill said that the reason he left the Forrester mansion earlier was because he didn’t want to lose his temper.

Ridge then told Brooke that Shauna wanted to have another wedding at the mansion, and Brooke asked why Ridge would want to legitimize the marriage. Ridge replied that it was already legitimate.

Brooke went on about how much she loved Ridge and that they needed to fix what had happened and put their relationship back together.

That was a terrific episode of B&B, and there’s plenty more action coming tomorrow, so stay tuned to the CBS soap! Here at CDL, we’ll keep you current with the latest soap updates, spoilers, and news, so stick with us. We’re your go-to source for the Bold and the Beautiful.