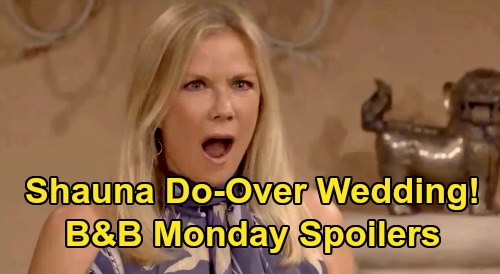 The Bold and the Beautiful spoilers for Monday, September 14, tease that Ridge Forrester (Thorsten Kaye) will have a big decision to make. As B&B viewers know, Ridge has just been cornered by Quinn Forrester (Rena Sofer), who is urging him to give Shauna Forrester (Denise Richards) a marriage do-over.

Quinn laid it on thick, telling Ridge that Shauna deserved a wedding with her family and friends present, and one that Ridge actually remembers.

Of course, this conversation happened just moments after Quinn and Shauna ended a video call, during which Shauna said that she wasn’t comfortable asking Ridge to give her a wedding ceremony.

But Quinn barreled ahead and decided to accost Ridge with the idea. Now Ridge seems to be toying with the idea of going ahead with a ceremony for Shauna – or at least the look on his face indicates that he’s thinking about it.

And who knows – at this point, Ridge might actually agree to such a thing. Ridge is so tired of Brooke Logan (Katherine Kelly Lang) and her feelings for Bill Spencer (Don Diamont), and he’s sick of Bill always showing up wherever Brooke is.

Ridge could decide to take a stand and show Brooke that he’s moving on with his life and that she’s betrayed him for the last time. Since B&B spoilers indicate that Ridge will take his commitment to Shauna seriously, there’s probably a good chance that he’ll agree to the idea.

Meanwhile, on the new episode of the Bold and the Beautiful on Monday, September 14, Bill will reach a major decision. As B&B viewers know, Bill has been lamenting to Wyatt Spencer (Darin Brooks) about his feelings for both Brooke and Katie Logan (Heather Tom).

Bill told Wyatt on Friday’s episode that while he loves Brooke, he loves Katie just the same, and he said that he was horrified about what his actions had done to his family with Katie and Will Spencer (Finnegan George).

Given Bill’s words and tone as he was talking with Wyatt, it sounded like he was truly remorseful for what he had done to Katie. And now, B&B spoilers for Monday say that Bill will make his commitment known to one woman.

But who will it be? Will he decide to go to Brooke and offer his commitment, or to Katie so that he can repair their family together?

We suspect that there’s a good chance that Bill will wind up approaching Katie again, especially since Katie recently indicated to Eric Forrester (John McCook) that she hadn’t given up all hope on her relationship with Bill.

Although Katie ended things with Bill face-to-face, she seems to be second-guessing herself a bit, and she could be in a position to at least consider taking Bill back.

We’ll see what happens on Monday’s episode, but it looks like Bill is going to reach out with an offer to Katie to get their family back together. And if Bill plays the Will card strongly enough, he might just have a chance at getting Katie to listen.

Monday’s episode of the Bold and the Beautiful sounds terrific, so stay tuned! We’ll keep you current on B&B spoilers and the latest news throughout the weekend, so stick with CDL. We’ve got you covered!