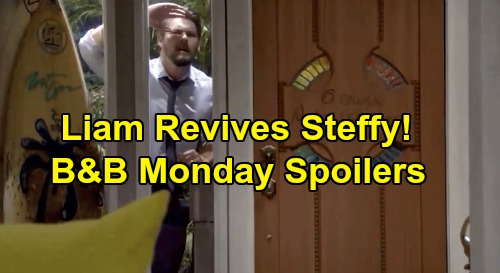 The Bold and the Beautiful spoilers for Monday, September 21, tease that Liam Spencer (Scott Clifton) will be beside himself as he tries to revive Steffy Forrester (Jacqueline MacInnes Wood).

As B&B viewers know, Liam has just arrived at Steffy’s place and he found Steffy crashed on the couch and totally unresponsive. Liam checked Steffy’s pulse, so he knows that she’s alive, but he’s going to be extremely concerned that he can’t awaken his ex.

Of course, it’s going to be terribly scary for Liam for several reasons. First, Liam’s already been seriously worried about Steffy and her pain management, and he never liked the fact that Steffy got a refill of her prescription pain meds.

It should become apparent to Liam pretty quickly that the reason Steffy is unresponsive is due to the pain killers, and he’s not going to like that.

Liam’s also going to be horrified by the fact that Kelly Spencer (Colette and Avalon Gray) was alone with Steffy while she was passed out on the pain pills. All sorts of scenarios will go through Liam’s mind – for example, what if Kelly had awakened and needed Steffy?

Or what if Kelly had found Steffy unresponsive and got frightened and was walking around the house unattended? Liam will surely think about the worst possible what-if scenarios.

Well, the good news here is that Liam will finally be successful in awakening Steffy, but it will apparently take a lot of yelling and even perhaps a face-slap to get Steffy to regain consciousness. And when Steffy does wake up, she’ll face a lot of questions from Liam.

Steffy will probably be disoriented and still in complete denial about her problem with the pain pills, but Liam’s going to realize that Steffy likely has more pills in her possession.

It appears that Steffy will deny having taken any pain pills, but Liam will know better, given Steffy’s demeanor and the fact that he could barely wake her up. Liam will go on an angry search of the cliff house to find the pills, which B&B spoilers say that he’ll ultimately find …and they will be in a place where Kelly could conceivably have found them.

Of course, Liam’s blood will boil since he’ll initially assume that John “Finn” Finnegan (Tanner Novlan) provided Steffy with a refill for the pills.

Steffy and Liam’s interaction about the pills and where she got them will most likely continue on into Tuesday’s episode, but ongoing spoilers say that Steffy will ultimately admit that she didn’t get the pills from Finn.

And by this time, Steffy is going to be furious with Liam for the inquisition and the accusations. It should be a bad scene.

Meanwhile, on the new episode of B&B on Monday, September 21, Thomas Forrester (Matthew Atkinson) and Hope Spencer (Annika Noelle) will get on with their roles as co-parents of Douglas Forrester (Henry Joseph Samiri).

For a while now, interactions between Hope and Thomas have taken place off-screen, but on Monday’s episode, viewers will get a chance to see Hope and Thomas interact for the first time in a long time.

It looks like things will be going fairly smoothly between Thomas and Hope as they work on being civil to each other and keeping the peace for Douglas’ sake. It seems that Douglas has been living full-time with Hope and Liam, and that he’s been able to spend lots of time with Thomas, too.

Hopefully, Thomas and Hope can have a good conversation on Monday’s episode and strive to put the past behind them.

Monday’s episode of B&B sounds terrific – you won’t want to miss the action next week, so stay tuned to the CBS soap! We’ll be sure to keep you updated as more B&B news comes in. You’ll want to stick with CDL for all the latest Bold and the Beautiful spoilers, daily episode recaps, and news.