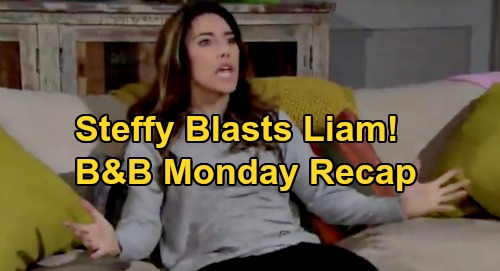 The Bold and the Beautiful spoilers recap for Monday, September 21, reveal that Liam Spencer (Scott Clifton) frantically tried to revive Steffy Forrester (Jacqueline MacInnes Wood), who was unresponsive on the couch.

Liam checked the baby monitor and was relieved to see Kelly Spencer (Colette and Avalon Gray) asleep in the bedroom, then he continued trying to rouse Steffy, who finally started to wake up groggily.

Liam asked Steffy what what going on, and Steffy seemed disoriented, wondering what happened to her. Liam was dismayed that Steffy didn’t seem to know where she was or what was going on.

Steffy suddenly remembered Kelly, and Liam assured her that Kelly was ok. Steffy then tried to get up off the couch, but she fell back, and Liam was seriously alarmed.

After a little time, Liam wanted to know what had happened, and Steffy said that she fell asleep, but Liam insisted that it was way more than that, since he couldn’t wake her up.

Steffy started to get agitated, wondering why Liam was interrogating her and why he was even at the house. Liam then launched into his concern about Steffy and John “Finn” Finnegan (Tanner Novlan).

Steffy looked at Liam in exasperation as he expressed his worry about Finn being attracted to Steffy and it potentially affecting his judgment. “Woah, are you serious right now? You’re telling me who I can and cannot see?” Steffy fumed.

Steffy got more agitated and then really started acting strangely, saying that the was “done with this” and that she “didn’t need anyone” and she was “fine.”

Liam said that Steffy wasn’t acting like herself, and that she was totally in denial, and he said that he needed to ask her an important question. “Are you still taking those pills?” Liam asked. “What pills?” Steffy asked.

Liam asked if Steffy’s doctor had given her more pills, and Steffy said that the doctor refused, and that Liam should go.

Liam insisted that Steffy was withholding something from him, and he lamented that his daughter lived here and that Steffy might be abusing prescription meds.

Liam decided to find out for himself whether Steffy was using pills, and he went tearing through the living room looking for them. Steffy was horrified, and she insisted that Liam stop, but Liam kept going.

Finally, Liam found the pill bottle in the couch. “I asked you for your honesty, and you said no!” Liam bellowed. “You’re lying to me!” Steffy cried and started breaking down.

Hope and Thomas were getting along much better than in the past, and Hope even thanked Thomas for stepping up and being a better father. Thomas praised Hope for being a great mom to Douglas and for forgiving him for the past.

Eventually, the discussion turned to Liam, and Hope expressed some frustration that Liam was off “rescuing” Steffy at the moment. Hope and Thomas then had an honest discussion about how Liam needed to let Steffy move on, and they were on the same page about Liam’s stance on Steffy’s new doctor as well.

Nevertheless, Hope said that she was secure in her relationship with Liam, but that she was worried about Steffy. Hope thought that Steffy deserved a break, and that Finn might be just what Steffy needs.

Talk turned back to Liam hovering in Steffy’s life, and Hope said that Liam might have a point about Finn and his objectivity, but Thomas said that Liam was just trying to control Steffy and Hope “in the nicest way possible.”

Thomas and Hope discussed all the hardships and pain that Steffy has endured recently, and Hope hoped that Finn was the man of Steffy’s dreams, since Steffy deserved to move forward.

Thomas told Hope that he told Liam to move on and back off. Hope agreed with that, and Thomas suggested that Hope tell Liam the same thing. Hope thought that Liam just didn’t need to get involved between Steffy and Finn.

That was a terrific episode of B&B, and there’s more coming tomorrow, so stay tuned! We’ll give you updates as more B&B news comes in. Stick with the CBS soap and remember to keep CDL at the ready for all the latest Bold and the Beautiful spoilers, news, and daily episode recaps.

Things got intense between Steffy and Liam today on #BoldandBeautiful. 😳 Who’s ready to see what happens tomorrow on an all-new episode? pic.twitter.com/uwnbPve9VN