The Bold and the Beautiful Spoilers Next 2 Weeks: Bill’s In Love With Brooke – Quinn Strikes Hard – Sally’s Dying Admission to Wyatt 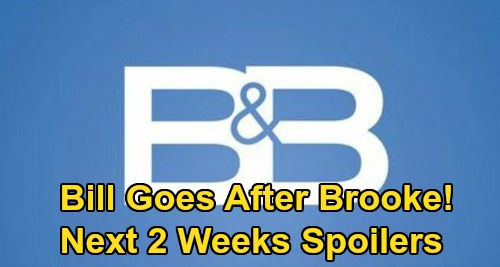 The Bold and the Beautiful (B&B) spoilers for the next two weeks tease that some big developments are brewing. During the week of March 16-20, Douglas Forrester (Henry Joseph Samiri) will give Hope Logan (Annika Noelle) and Liam Spencer (Scott Clifton) a crafty surprise. It appears they’ll get a push toward the altar through some cute bride and groom T-shirts.

Afterward, Brooke and Ridge will be grateful to have the full story. They won’t blame Steffy too much since Thomas is a master manipulator. Even Ridge himself was manipulated, so he can’t very well hold it against Steffy!

Besides, Ridge and Brooke will soon look to the future. They’ll indulge in a passionate reunion and recommit to each other, so that’ll leave them on cloud nine.

Meanwhile, Bill Spencer (Don Diamont) will keep mulling over that kiss he shared with Brooke. He can’t stop thinking about his former flame, which is a problem since they’re both in relationships with other people.

Bill’s supposed to be focusing on Katie Logan (Heather Tom), but it’s Brooke he’ll call in the week ahead. He’ll want to talk about their lip lock, but Brooke will insist they should keep it in the vault.

Of course, that’s going to be tough since Shauna Fulton (Denise Richards) apparently witnessed the smooch. Shauna will confess what she saw to Quinn Forrester (Rena Sofer), who’ll be thrilled over this lucky break.

Quinn will feel like Shauna has exactly what she needs to be with Ridge. She’ll likely urge Shauna to confide this secret to Ridge and make him doubt Brooke’s devotion to him.

However, Shauna genuinely cares about Ridge and knows how much he wanted his marriage to work. She’ll probably tell Quinn she doesn’t want to mess things up for Ridge, but Quinn can just do it herself! There’s no way Quinn’s going to pass up a chance to destroy her nemesis.

Other Bold and the Beautiful spoilers say Wyatt Spencer (Darin Brooks) will have to get sneaky. He’ll be missing Flo Fulton (Katrina Bowden), so he’ll go behind Sally Spectra’s (Courtney Hope) back to see her. It looks like they’ll share some kisses, but Wyatt will feel guilty about essentially cheating.

This reunion may not be the real thing to Wyatt, but it’s quite real to Sally – who’s happens to be dying! Geez, you’d think Flo and Wyatt could cool it for a bit. There’s no reason to take risks like this and potentially hurt Sally, but this plan has been a bad one from the start.

Nevertheless, Wyatt and Flo will stick to their goal. They want to make sure Sally’s happy in her final weeks – and that’s what Sally’s hoping for, too. She’ll ignore Dr. Escobar’s (Monica Ruiz) texts to concentrate on her bliss with Wyatt, who’ll ask Sally some questions in hopes of sparking a confession.

During the week of March 23-27, Sally will finally be pushed to her limit. She’ll be under a tremendous amount of pressure due to Wyatt’s grilling sessions and Dr. Escobar’s repeated attempts to contact her. B&B spoilers say Sally will break down and give Wyatt updates on her terminal diagnosis.

It’ll be hard for emotional Sally to share this news, but she should feel better to get it off her chest. Wyatt will have to pretend he’s shocked, but he should do a pretty good job of it. He’ll let Sally know he’s going to stay right by her side no matter what, but what happens if a miraculous recovery’s looming? That’s always a possibility in the soap world, so stay tuned.

B&B fans can also expect Quinn to consider her next move. Armed with major ammo against Brooke, Quinn will be ready to strike. The Bold and the Beautiful spoilers say Quinn will do some plotting and try to figure out how to inflict the most damage.

Quinn will definitely want Brooke to suffer, but she has to play this just right. Quinn will want to use her knowledge of the “Brill” kiss in the best way possible. It sounds like some great stuff’s cooking on the CBS soap. Don’t miss all our hot updates here at CDL. Be sure to check back regularly for other Bold and the Beautiful spoilers and news.

Brooke and Ridge’s love is stronger than ever, but will it last? See if Ridge finds out about Brooke’s secret kiss this week on #BoldandBeautiful! pic.twitter.com/O8ZCsToR8Z