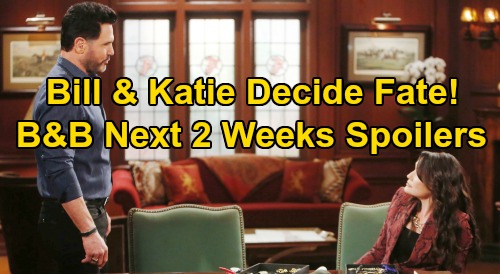 The Bold and the Beautiful (B&B) spoilers for the next two weeks tease that some tight spots are coming up for several characters. During the week of April 13-17, Sally Spectra (Courtney Hope) will battle concerns about her partner in crime. Dr. Penny Escobar (Monica Ruiz) will be a mess thanks to Flo Fulton’s (Katrina Bowden) latest visit, so Sally will try to keep her ally in line.

At the beach house, Flo will drop a bomb on Wyatt Spencer (Darin Brooks) when she insists Sally should move out. Wyatt will have a hard time accepting that this is the right thing to do.

He won’t get why Flo would want him to do something so drastic when Sally’s dying, but Flo will think it’s important to reestablish boundaries.

Of course, Flo will also be concerned about the lies Sally might be telling. During a confrontation with Sally, Flo will call her rival out for her phony kindness. She’ll also try to trap Sally by pretending she’s got evidence against her.

Flo will want Sally to come clean about being a fraud, but Sally should realize Flo doesn’t know as much as she claims to.

Sally will manage to stay in control of the secret – but not for much longer! The Bold and the Beautiful spoilers say Flo will uncover a shocker on Dr. Escobar’s laptop. As Flo examines Sally’s medical records, it seems she’ll get the proof she was searching for. From there, Flo will just have to decide what to do next.

After a night on the town leads to Ridge’s drunkenness, he’ll wake up back in Los Angeles. Ridge will be stunned to see he’s with Brooke Forrester (Katherine Kelly Lang) and has bailed on Shauna in his intoxicated state.

After an apologetic phone call to Shauna, Ridge will be no closer to figuring out what really happened. We’ll see how much Brooke reveals, but Ridge will definitely remain angry with her. Brooke’s betrayal isn’t something Ridge can just let slide, so there’ll be a lot to talk about.

Meanwhile, Eric Forrester (John McCook) will continue to wrestle with the topic of loyalty. Brooke burned Ridge big time by going behind his back and kissing Bill Spencer (Don Diamont). Although Eric doesn’t approve of how Brooke treated Ridge, he’s always going to care about her and want to support her as a friend.

Quinn Forrester’s (Rena Sofer) role in the exposure will remain difficult for Eric to deal with. There’s also heartbroken Katie Logan (Heather Tom), who became collateral damage in Quinn’s plot to destroy Brooke. Eric will fret about all parties involved, but Quinn will be adamant that she did Katie a favor – one she won’t apologize for.

Other Bold and the Beautiful spoilers say Bill will put Quinn on notice. A serious threat will be delivered, but it’s doubtful Quinn will be shaking in her boots! Quinn’s feeling large and in charge these days, so she may downplay any risk Bill might pose.

During the week of April 20-24, B&B fans can expect a deep discussion for Katie and Bill. It’ll take Katie a while before she reaches this point and is willing to talk, but she’ll finally get there. Katie will think they need to get honest about their feelings, relationship and future. It sounds like this conversation will decide the fate of “Batie.”

Finally, Penny will make crazy choice that proves to be a game-changer. Dr. Escobar will make a move that could turn things upside down for Flo, Sally or perhaps both! It’ll be interesting to see exactly what Penny decides and what wild outcome it’ll lead to.