BY Heather Hughes on January 5, 2020 | Comments: one comment
Related : Soap Opera, Spoiler, Television, The Bold and the Beautiful 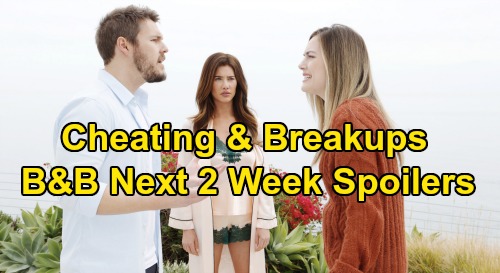 The Bold and the Beautiful (B&B) spoilers for the next two weeks some daring moves are in store. During the week of January 6-10, Steffy Forrester (Jacqueline MacInnes Wood) will get asked out by a new hottie at Forrester Creations. Collin (Oli Green) will find himself quite captivated by Steffy, so he’ll wonder if she’d be open to a date night.

A flattered Steffy will mull over Collin’s offer and give him her decision while Liam Spencer (Scott Clifton) makes a decision of his own. Thanks to Thomas Forrester’s (Matthew Atkinson) death threat, Liam will rat him out to Steffy and Hope Logan (Annika Noelle).

He’ll want them to know exactly how dangerous Thomas is, but he’ll take things a step further with a marriage proposal stipulation.

After setting the mood for romance, Liam will promise to marry Hope if she gives up shared legal custody of Douglas Forrester (Henry Joseph Samiri), He’ll think it’s the easiest route to keep Thomas at a distance, but Hope will think Liam’s asking too much of her. They’ll argue until Liam walks right out the door!

Over with Ridge Forrester (Thorsten Kaye), he’ll pay Steffy a visit and make his position clear. Ridge will believe Steffy and Liam belong together. He’ll still believe they could get their happily ever after, but he’ll hate that it would mean heartbreak for Brooke Forrester’s (Katherine Kelly Lang) daughter.

Speaking of Brooke, she’ll be hopeful that Ridge will move back in and get their bliss back on track. Brooke will think they can work through their issues, but she has no idea things are about to get worse! That’s because Thomas will make some shocking moves and set a catastrophe in motion.

It turns out Thomas will hear Liam’s proposal condition and hit the roof. He’ll chew Liam out for trying to mess with Hope and Douglas’ connection, but Liam will just shove him in return.

The Bold and the Beautiful spoilers say Thomas will retaliate by setting up a kiss between Liam and Steffy. He’ll manipulate the situation and make sure Hope gets a front-row seat for this passionae meeting of lips.

Hope will lash out in her devastation and make a fateful choice. She may decide that she can’t be with Liam after a stunt like this. Hope will at least reject the marriage offer based on the sound of this difficult ordeal.

During the week of January 13-17, Hope’s despair will continue. She’ll still be reeling as she cries to Brooke about what went down between Liam and Steffy. Brooke’s not going to appreciate the stipulation that came with Liam popping the question. She certainly won’t approve of Steffy and Liam’s kiss either!

The Bold and the Beautiful spoilers say Brooke and Ridge’s reunion will be thwarted once again. They’ll have brand-new reasons to spar, so their divorce will likely be completed after all.

As for Shauna Fulton (Denise Richards), she should be eager to pursue Ridge and get their own love story cooking. Shauna will hope “Flo” Fulton (Katrina Bowden) can find her happiness again as well, so she’ll make a suggestion.

B&B fans can expect Shauna to pressure Flo. She’ll think it’s time for Flo to go after her second chance with Wyatt Spencer (Darin Brooks). Shauna will be adamant that Wyatt belongs with Flo, not Sally Spectra (Courtney Hope). She’ll do whatever she can to make Flo see the light and steal Wyatt away.