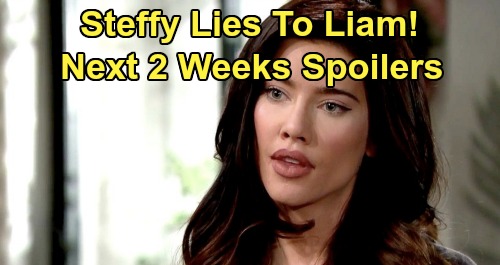 The Bold and the Beautiful (B&B) spoilers for the next two weeks tease that some shockers and shakeups are brewing. During the week of January 20-24, Sally Spectra (Courtney Hope) will make Wyatt Spencer’s (Darin Brooks) breakup efforts tricky. He’ll try to explain that he wants to call off their engagement, but Sally will have trouble picking up what he’s laying down.

Afterward, Sally will end up facing off with “Flo” Fulton (Katrina Bowden). It looks like Sally will eventually accept that things are over with Wyatt, but she’ll want to give Flo a piece of her mind.

Sally will make her relationship status clear to Flo – perhaps meaning that she’s done with Wyatt, so good luck with that! Sally may think Wyatt’s just going to burn Flo, too.

Whatever the case, Sally will turn her attention to another task later. She’ll head to the doctor’s office and recap her strange symptoms lately. Sally’s been shaky and anxious on the job lately.

Sally will also fill her doctor in on dizziness and headaches, so some tests will be run. It shouldn’t be long until Sally gets a diagnosis – and it will shatter her world.

Katie Logan (Heather Tom) will support Sally in her time of need. She’ll get updates on what Sally’s dealing with and offer advice. Katie will also promise Wyatt that Sally’s a survivor, which could have a double meaning if this diagnosis is deadly.

This is Sally’s secret to tell, but Katie may offer a hint or two and give Wyatt something to think about.

It looks like Sally will have another heart-to-heart with Wyatt later – one that brings more closure. Wyatt will feel like something’s up with Sally, but he won’t be able to put his finger on what it is.

Wyatt may sense it’s more than just the usual pain of a breakup, but Sally probably won’t reveal her illness concerns just yet.

Over with Thomas Forrester (Matthew Atkinson), he’ll be on cloud nine when Hope Logan (Annika Noelle) lets him comfort her. Thomas will be there for Hope as she tries to let go of Liam Spencer (Scott Clifton).

Thomas tracks Steffy Forrester (Jacqueline MacInnes Wood) down later to be sure she doesn’t blab about him arranging that “Steam” kiss spectacle. Steffy cooperated with her brother to destroy “Lope” – no two ways about it, unless Steffy comes clean she is lying to Liam, even if it’s a lie of omission.

After Eric kicks Shauna Fulton (Denise Richards) out of the house, Quinn will be enraged all over again. She’ll tell Eric and Ridge Forrester (Thorsten Kaye) that she won’t bow down to Brooke. Quinn’s enemy may have won the battle, but she hasn’t won the war!

That war will continue to heat up during the week of January 27-31. The Bold and the Beautiful spoilers say Thomas will seek out Quinn and make a proposal. He’ll try to fuel her intense hatred of Brooke, which is something he’s on the same page about.

Thomas will want Quinn to accept that they’re two peas in a pod – at least in this one area. He’ll hope Quinn’s willing to team up for the ultimate Brooke takedown. Whether Quinn agrees to that alliance or now, B&B fans can expect another Brooke blow. Quinn will strike back in a big way, so Brooke had better be ready!