BY Sean O'Brien on May 19, 2020 | Comments: Leave Comments
Related : COVID-19 NEWS, Soap Opera, Spoiler, Television, The Bold and the Beautiful 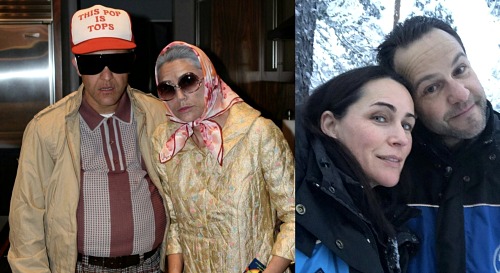 The Bold and the Beautiful spoilers tease that Rena Sofer (Quinn Forrester) and her husband, director and producer, Sanford Bookstaver, provided a self-deprecating image of themselves on Instagram. The B&B actor and her husband dressed as future versions of themselves in honor of their wedding anniversary.

Aside of the photo, where the couple is dressed in full old school getup, Sofer recently said, “On May 18 2003 I married this old man. Even though we got divorced three years ago, today would have been our 17th wedding anniversary. Since we are back together, it still kinda is…. I guess.”

She then complemented her husband, saying, “But through it all, the person who’s been there. Had my back, through ups and downs, thick and thin, is this guy. His hat says it all this pops IS tops!!! @sbookstaver you are the love of my life, my very best friend and the only person I’d ever want to be quarantined for life with. From pandemic to panacea you are it for me!! I love you with all my heart and soul!! Thank you for the last 19 years together and a lifetime more!! Happy (kind of ) anniversary!!”

Sofer’s outlook is upbeat and offers an encouraging message to all of her followers who, like her, are enduring the effects of this situation.

Sofer, who had a daughter, Avalon, with Bookstaver in 2005, is a longtime actor with numerous credits in a career that began in the late 1980’s. She’s been part of B&B’s cast since 2013.

Meanwhile, back in the paused version of Los Angeles, California, Sofer’s character, Quinn, is in love with her husband, Eric Forrester (John McCook). But that didn’t stop her from acting on long-standing insecurities.

Eric had stressed to Quinn that he wanted her to lay off Brooke, who was having issues in her marriage with his son, Ridge Forrester (Thorsten Kaye). Quinn said that she would, but then didn’t.

As B&B fans know, but Eric doesn’t, she also fed liquor to Brooke, who is a recovering alcoholic. That looms as another reveal that will be seen by the audience in the hopefully not too distant future.