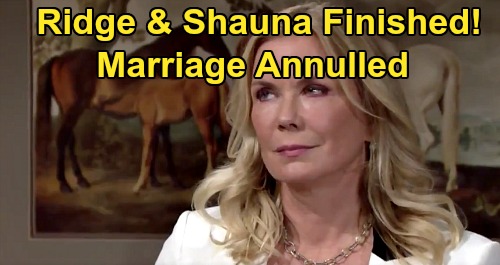 The Bold and the Beautiful spoilers document that Shauna Fulton Forrester (Denise Richards) appears to have provided the audience with a verbal clue as to the reason her marriage will be annulled. Richards’ character was talking with the mastermind of the wedding ceremony plan, Quinn Fuller Forrester (Rena Sofer), when she mentioned what happened in the chapel.

Shauna said that she and her new husband weren’t able to spend their wedding night together because the Forrester Creations pilot arrived and whisked Ridge Forrester (Thorsten Kaye) away. As B&B fans recall, Brooke Logan (Katherine Kelly Lang) sent Kevin Frazier (who played the FC pilot) to find and retrieve Ridge on the fated night in question.

Brooke could spend years searching for a needle in a soapy haystack if she didn’t know where Ridge was married. But the wedding certificate Shauna has and information Frazier’s character is able to offer about the wedding officiant can allow a conversation to take place.

It’s reasonable to assume that Brooke’s suspicions about the unorthodox nature of Ridge’s nuptials will spark her quest for answers. The chapel officiant can directly testify to Ridge’s state of mind, as he seemed to be the only person who was present at the ceremony besides Shidge.

Of course the dirty trick that Quinn suggested, where Shauna texted Carter Walton (Lawrence Saint-Victor) under the guise of being Ridge, might eventually prove to be revealing as well. But that’s the rougher plot path, unless Quinn and Shauna inadvertently divulge this information.

The officiant went forward with the ceremony even though he was questioning Ridge’s capacity to do so. Of course, the chapel’s business license and the officiant’s credential would seem to be in peril if he provides details of the event to Brooke, or possibly Carter. But maybe he can be persuaded to do so.

Ridge has developed feelings for Shauna. But those are based on his belief that she’s been honest with him.

The contrast to Brooke put Shauna in a good position to eventually become Ridge’s significant other. But what may have been a natural course was forced to the finish line by Quinn’s scheme.

Of course Ridge and Brooke were in the midst of yet another reconciliation. But their past splits indicate that another would eventually come and with it, Shauna’s legitimate opportunity would likely have arrived.

The manner in which Shauna gained the Forrester name has created a reality that feels unsustainable. Brooke’s desire to find answers will now apply pressure, with the suggested clue as good a possibility as any in leading to the reveal and marriage annulment.