The Bold and the Beautiful Spoilers: Ridge & Shauna Reconnect After Flo’s Head Injury – Will Couple Bond Taking Sally Down? 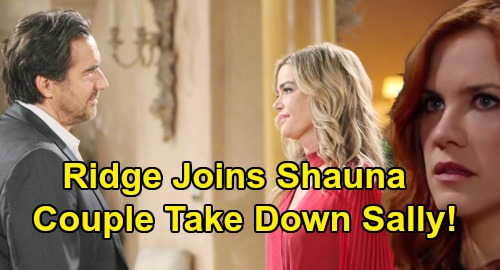 The Bold and the Beautiful (B&B) spoilers tease that Sally Spectra’s (Courtney Hope) deception over her supposedly terminal illness is going to have some far-reaching effects. Obviously, the lives of Wyatt Spencer (Darin Brooks), Flo Fulton (Katrina Bowden), and Dr. Penny Escobar (Monica Ruiz) will be drastically altered by the revelation that Sally faked her illness, but there will be other characters who will be stunned as well.

Katie Logan (Heather Tom) would be one of those people, since Sally seriously used her in the scam, As B&B viewers will remember, Sally made sure that Katie was with her when she got her fake diagnosis, and that Katie blabbed the secret to Wyatt.

Katie’s not going to be happy when she finds out that she was totally used by Sally in this fashion. And then there’s Steffy Forrester (Jacqueline MacInnes Wood) and Ridge Forrester (Thorsten Kaye), both of whom were devastated to find out that Sally was dying.

Steffy and Ridge felt terribly because they were about to fire Sally, then they decided to keep Sally on board and use a Ridge-altered version of Sally’s designs in their couture collection.

Ridge took it upon himself to take the essence of Sally’s designs and turn them into couture designs that Sally could be proud of. Something tells us that when he finds out about Sally’s deception, he’s going to be pretty peeved at being played like this.

Then there’s someone else who’s probably really going to be on an anti-Sally kick after the truth comes out, and that’s Shauna Fulton (Denise Richards).

Shauna is going to learn not only that Flo’s feelings were messed with, but that Flo was attacked by Penny and that Penny and Sally sought to cover up the horrible physical assault. It’s probably going to make Shauna’s blood boil when she learns what happened to Flo.

Well, according to B&B spoilers, Shauna will come back to Los Angeles, and it’s most likely going to be to tend to an ailing Flo after her attack at Penny’s hands. Shauna is probably going to be on the warpath against Sally, who set this whole debacle into motion, which ended with Flo suffering a head injury.

Of course, at this point, we don’t know just how serious Flo’s head injury will be, but at the very least she should have a concussion, and it could be more serious than that. Shauna is going to want to get to the bottom of who’s responsible for this, and we think it’s likely that she’ll turn to Ridge for help with that.

Sure, Shauna said that she had to leave Ridge behind and previously she told him goodbye, but surely their chapter isn’t done just yet. What if Ridge and Shauna team up to go after Sally and Penny and make sure that they pay for what they did to Flo? Ridge would certainly sympathize with Shauna – after all, he was duped by Sally himself.

Might we see Shauna and Ridge bond over their distrust of Sally and their dislike for what Sally did? We think it’s likely, and this might be the way that Ridge and Shauna find their way back to each other. Do you think that Ridge and Shauna will come together to fight Sally for what she’s done? Stay tuned to B&B and keep CDL at the ready the latest Bold and the Beautiful news and spoilers.