The Bold and the Beautiful Spoilers: Sally Knows Katie Spilled Death Secret – But Love For Wyatt Wins Out 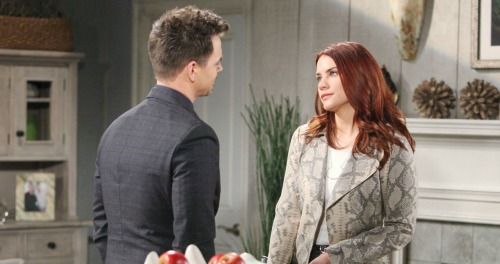 The Bold and the Beautiful (B&B) spoilers tease that Sally Spectra (Courtney Hope) will soon start to feel suspicious. As B&B viewers know, Sally was rocked by a terminal diagnosis and she’s got about a month left to live.

Sally’s currently confiding in Katie Logan (Heather Tom), and she has no idea that anyone other than Katie knows about her sad fate. She’s not thinking clearly right now, and she seems to think that she can keep her health condition a secret.

But of course, Katie immediately blabbed Sally’s condition to Bill Spencer (Don Diamont) and Wyatt Spencer (Darin Brooks), and for good reason – Bill knew that something was on her mind and she couldn’t lie to him, plus she wanted Wyatt to know what Sally was going through.

But now that Wyatt knows, he’s going to become resolved to make the last weeks of Sally’s life worth living.

According to B&B spoilers, Wyatt and Flo Fulton (Katrina Bowden) will decide to make a huge sacrifice – they’ll put their relationship on hold so that Wyatt can reunite with Sally and spend her final days making her happy.

Wyatt will then go to Sally with a stunning admission and a proposal. It looks like he’ll tell her that he wants to reunite and that he’d like her to move back into his place.

Of course, this should make Sally immensely happy, but she might find herself getting a little suspicious of Wyatt’s motives. Still, it seems that she’ll believe that Katie has kept her confidence, and she’ll take Wyatt’s actions and sentiments at face value.

But Katie will have another idea as well. According to B&B spoilers, Katie will make it her mission to save Sally’s job at Forrester Creations. It appears that she might go talk with Ridge Forrester (Thorsten Kaye) and Steffy Forrester (Jacqueline MacInnes Wood), as ongoing spoilers say that Ridge and Steffy will soon step up and do the right thing about some issue.

Sally will find herself floored when she learns the Ridge has salvaged her designs. B&B viewers will remember that Ridge was pretty harsh with Sally about her designs a while back, insisting that he couldn’t use them and that they weren’t up to Forrester quality. Well, it seems that he might tweak the designs, as he’ll end up using a version of them in Forrester’s couture collection.

That will be great for Sally, and surely she’ll be thrilled, but after both Wyatt’s and Ridge’s turnabouts, she’s probably going to be feeling pretty suspicious about whether everyone secretly knows about her terminal condition. In fact, she’ll go to Katie and grill her about whether she spilled the secret.

We’ll see if Katie admits that she disclosed Sally’s confidential information. Katie’s not really one to lie, so chances are, she’ll admit what she did. And that would probably be a good thing, because it’s really time for Sally to start letting people in and doing some good things for her. She deserves the best life that she can squeeze into the next four weeks.

How do you think that Sally will react when she learns that Katie spilled her secret? Stay tuned to B&B and be sure to read CDL often for the latest Bold and the Beautiful spoilers, recaps, and news.