BY Heather Hughes on January 21, 2020 | Comments: one comment
Related : Soap Opera, Spoiler, Television, The Bold and the Beautiful 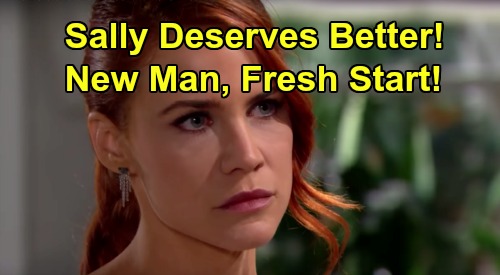 The Bold and the Beautiful (B&B) spoilers tease that Sally Spectra (Courtney Hope) will has some rough days ahead of her – as if she needs any more! Sally has had her heart broken more times than she can count. Thomas Forrester (Matthew Atkinson) left Sally devastated on more than one occasion, and now Wyatt Spencer (Darin Brooks) is doing the same thing. These men just can’t stop stomping all over poor Sally!

Of course, we can’t forget about Bill Spencer’s (Don Diamont) war with Sally either. He nearly got Sally killed in that building demolition, which led to Sally’s kiss with Liam Spencer (Scott Clifton).

Naturally, nothing ever became of Sally’s feelings for Liam – because Sally never gets what she wants. Now B&B’s about to pile on the problems by diagnosing Sally with a serious illness.

When is this chick going to catch a break?! It’s high time for Sally to turn her life around and find some happiness. Unfortunately, there are no guarantees that Sally will ever truly capture her bliss. The Bold and the Beautiful spoilers say a deadly exit is coming up later this year, so that’d certainly line up with Sally’s luck.

However, many B&B fans are hoping that Sally’s suffering will eventually come to an end. Her battle with this illness could leave Wyatt torn between Sally and “Flo” Fulton (Katrina Bowden) again, but should Sally really take him back? Wyatt’s becoming almost as bad as Liam in terms of flip-flopping.

It’d be nice for Sally to find love with someone new after the worst of her crisis. Carter Walton (Lawrence Saint-Victor) might be an option if the show truly wanted to give Sally a brand-new man.

They could even cast another hunk for Sally, but B&B doesn’t seem eager to do that for Sally, Steffy Forrester (Jacqueline MacInnes Wood) or anyone else.

Given the show’s penchant for recycled love stories, they might pair Sally up with someone she’s shown interest in before. That probably wouldn’t solve the flip-flopping problem we mentioned, but at least Wyatt might get jealous!

Sally deserves the chance to rise above this breakup once she accepts it. She needs to overcome all the blows she’s been dealt and move on.

Since Sally’s old feelings for Liam have been brought up, could they rekindle something down the road? What about Thomas? Could this illness actually show Thomas has a heart – one that’s capable of doing something besides obsessing over Hope Logan (Annika Noelle)?

When a soap character’s sick, it can sometimes be a game-changer. People tend to start battling feelings they didn’t even know were there. Sally’s suffering could affect how several characters view her. Will one of them be a different love interest for Sally?