The Bold and the Beautiful Spoilers: Sally Pregnancy Changes Everything – Wyatt Wants Flo, But Stands by Baby Mama?

BY Heather Hughes on January 11, 2020 | Comments: one comment
Related : Soap Opera, Spoiler, Television, The Bold and the Beautiful 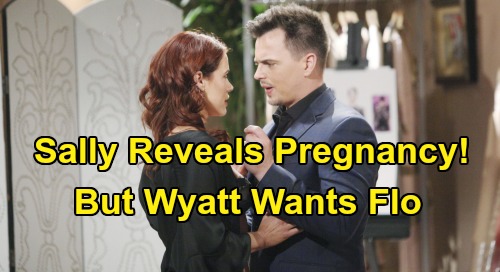 The Bold and the Beautiful (B&B) spoilers tease that Wyatt Spencer (Darin Brooks) will find himself torn between two very different women. Wyatt’s spark with Sally Spectra (Courtney Hope) has always been an interesting one. Part of Wyatt’s drawn to Sally’s feistiness and can-do spirit. He’s shown that be believes in her and certainly does care about her.

However, loving someone and being in love aren’t quite the same thing. When it comes to being IN love, Wyatt’s heart may still belong to “Flo” Fulton (Katrina Bowden).

B&B fans know they were high school sweethearts once upon a time. They were crazy about each other, but they were ripped apart by circumstances beyond their control.

Flo and Wyatt got their second chance until the baby swap drama blew up, but Flo’s managed to undo most of the damage. Saving Katie Logan’s (Heather Tom) life with a kidney donation went a long way toward earning Wyatt’s forgiveness. He can’t forget what Flo did entirely, but he feels he knows Flo is good at her core.

The Bold and the Beautiful spoilers say Wyatt will decide to break up with Sally, but she’ll make it awfully difficult. Sally’s in love with Wyatt and will struggle when she realizes he wants to get back together with Flo.

Sally’s already been burned by Wyatt, so she’s going to be devastated and furious when it inevitably happens again. Nevertheless, Wyatt will feel like it’s best to be honest and free Sally. He can’t give her the commitment she needs when he’s longing for another woman.

The Bold and the Beautiful spoilers say it’ll look like Wyatt and Flo are all set for a happy ending. That’s when a twist will strike, so it could shift Wyatt’s romantic path once more.

Will Sally shock Wyatt by revealing that she’s pregnant? It’s about time for B&B to do another pregnancy storyline, and this one would definitely complicate Wyatt’s world.

Wyatt would be in love with Flo while Sally was having his baby. That’s a tricky situation to navigate and would leave the door open for the baby to pull Wyatt back toward Sally.