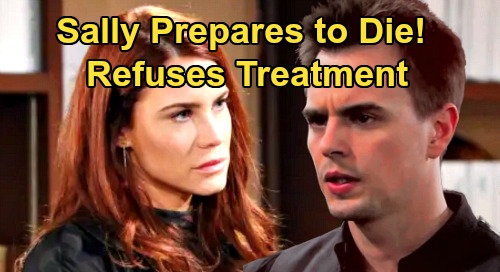 The Bold and the Beautiful (B&B) spoilers tease that Sally Spectra (Courtney Hope) will sink to a dark place following her difficult diagnosis. There’s no confirmation on what that diagnosis is just yet, but we know it’ll absolutely devastate Sally. Life as she knows it will change forever. In fact, there are signs that Sally expects her life to end entirely!

After Sally learns what she’s up against, she’ll swear Katie Logan (Heather Tom) to secrecy and make a troubling decision. The Bold and the Beautiful spoilers say Sally will decide to refuse treatment.

Katie will be taken aback and quit upset over this decision. She’ll think Sally should fight and will do everything she can to change Sally’s mind.

However, it seems Sally just won’t see the point. She may feel like she’s going to die anyway, so she might as well make the most of the time she has left. Sally may not want to spend her remaining months in a hospital bed or undergoing some treatment that’ll make her weaker.

Could this mean B&B has a brain tumor in store for Sally? Something like Parkinson’s could be managed with medication and various types of therapy for many years to come. An inoperable brain tumor, on the other hand, might leave Sally feeling entirely hopeless.

There are indeed treatment options that could be pursued to slow the growth of that tumor, but Sally may not be interested in those.

Of course, The Bold and the Beautiful could diagnose Sally with something else instead. There are plenty of deadly medical issues out there to choose from. The point is Sally will apparently brace for death. If this diagnosis is crushing and she refuses treatment, we can only assume that Sally doesn’t expect to beat it.

Katie may push Wyatt to plead with Sally and convince her to seek treatment – even if that treatment only prolongs her life instead of saving it.

Regardless, it’s looking more and more like Sally will be the shocking beloved character death in 2020. She already made a statement to Wyatt about them being OK “even if it killed her,” so this treatment refusal is another bad sign.

Most B&B fans won’t be pleased if Sally’s killed off, but Courtney Hope’s sure to knock this storyline out of the park!