The Bold and the Beautiful Spoilers: Sally Saved By Dr. Bridget Forrester – Flo Loses Wyatt to Sally After Shocking Cure?

BY Dorothy Hill on February 24, 2020 | Comments: one comment
Related : Soap Opera, Spoiler, Television, The Bold and the Beautiful 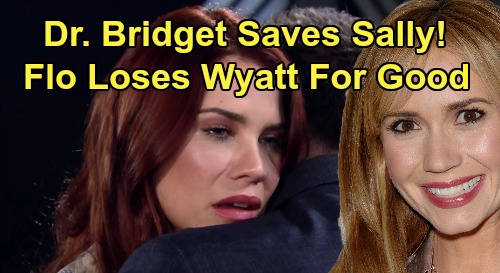 The Bold and the Beautiful (B&B) spoilers tell us the sad story of Sally Spectra (Courtney Hope) is about to get more complicated and emotionally jarring. During the week of February 24 – 28, Wyatt Spencer (Darin Brooks) goes to Sally to comfort her in her time of need with the approval of Flo Fluton, (Katrina Bowden) – the girl we love to hate.

Sally’s life on the show has been one hardship after another, but this coming week will change that. Since TPTB of The Bold and the Beautiful have made their decision, there’s a possibility of no turning back from this mysterious illness of which she’s dying. They still have not revealed what exactly is causing Sally’s death diagnosis and, according to Courtney Hope, they won’t!

The Bold and the Beautiful spoilers say Sally’s life is almost over, and Wyatt seems to be really upset about the entire situation with the somewhat questionable approval of Flo. She believes that Wyatt could give Sally a little happiness, because there’s no way she will get well.

Since there is no real reason for Flo not to trust that Wyatt won’t come back to her after Sally’s gone, she’s being generous. Katie Spencer (Heather Tom), has secretly been pushing for Sally to at least have Wyatt nearby before her time is up, and that will begin to happen.

But will we find out that Wyatt is being Sally’s knight in shining armor without her being wise to him knowing her secret. Does he really feel the same way for her as he used to?

Or is the terminal illness the source of Wyatt’s deep affection for her. Wyatt may find that Sally’s situation will have him confront his feelings for her.

Sally and Wyatt will embrace in a tender moment that Sally really needs and Wyatt is cherishing. These moments of tenderness could possibly mean more for Wyatt as Sally’s love never changed. They never really had a chance to repair their misunderstanding before Sally got sick.

But B&B spoilers say that it seems the last month of Sally’s life will bring back a beloved favorite character – Bridget Forrester (Ashley Jones), remember she’s a doctor. Could this mean that Sally’s life could extend longer than a month with some special help from Bridget?

Would this mean that Wyatt and Sally actually have a chance at rekindling a love that was interrupted by Flo’s return? Because Wyatt and Sally are getting close as time is running out for Sally it’s entirely possible that Wyatt’s heart could belong to his ex again soon. That would leave Flo regretting being so altruistic in the first place!

Let’s wait and see if the soap spirits will allow Sally to be saved by the medical hands of Bridget. In the meanwhile make sure to come back to CDL for all the hottest The Bold and the Beautiful spoilers, news and reviews!