BY hellodrdavis on March 23, 2020 | Comments: 2 comments
Related : Soap Opera, Spoiler, Television, The Bold and the Beautiful 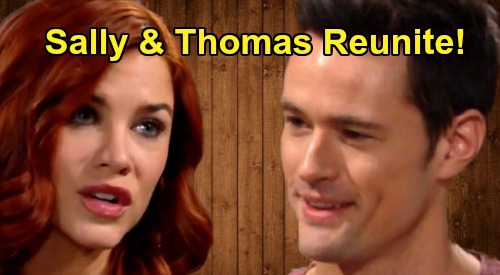 The Bold and the Beautiful (B&B) spoilers tease that Sally Spectra (Courtney Hope) may soon be a much-detested person on the B&B scene. As viewers now know, Sally’s not really dying, and that means that she’s been perpetrating a major scam on Katie Logan (Heather Tom), Wyatt Spencer (Darin Brooks), and others.

Of course, it seems pretty cruel for Sally to manipulate other people by getting them to believe that she’s dying, and we can only imagine what Sally’s motivation is here.

Sally’s likely trying to get Wyatt for herself and away from Flo Fulton (Katrina Bowden), hoping to reel him in and then somehow keep him. Now, how Sally’s planning on managing that remains to be seen, but it’s quite devious.

In fact, Sally’s big scheme reminds us of another B&B manipulator who has recently received his comeuppance for his schemes, and that’s Thomas Forrester (Matthew Atkinson).

B&B viewers haven’t seen hide nor hair of Thomas since the big scene at his wedding to Zoe Buckingham (Kiara Barnes). Thomas left the Forrester mansion in tears after everyone turned on him and he realized that he had been played.

Who knows where Thomas has been since then, but chances are he’s been off with Vinny Walker (Joe LoCicero) and staying in hiding for a while. But we all know that Thomas doesn’t stay down for long.

He just might make a comeback at some point, with even more devious plans in mind. In fact, we wouldn’t be surprised if Thomas plotted revenge against some of the people who brought him down at the wedding.

Back to Sally, it seems that it will only be a matter of time before she takes a big fall herself. Clearly, she’s not going to be able to keep the fake dying ruse going on forever, since after a couple weeks people will expect Sally to actually die! Something’s going to have to give, and B&B spoilers indicate that Flo might start to become suspicious after her next interaction with Sally.

At any rate, once the ugly truth does come out about Sally, she’s going to be a pariah, to say the least. And that means that both Thomas and Sally are going to be outcasts, which could mean that they’ll find their way back together.

No one else will probably want anything to do with them, so why shouldn’t Sally and Thomas get back together? Sally and Thomas were in love once, and they could gravitate back to each other as they’re both excluded by everyone else in their lives.

In fact, Sally and Thomas could become quite the force to be reckoned with if they unite and end up supporting and bolstering each other. They could become the new villain-villainess couple from hell and seek revenge on people like Hope Logan (Annika Noelle), Flo, and people who they think did them wrong.

We’ll see what happens here, but it would make for some great drama if Sally and Thomas teamed back up. Would you like to see Sally and Thomas get back together down the line? Stay tuned to the Bold and the Beautiful and remember to check CDL often for all the latest B&B news and spoilers.