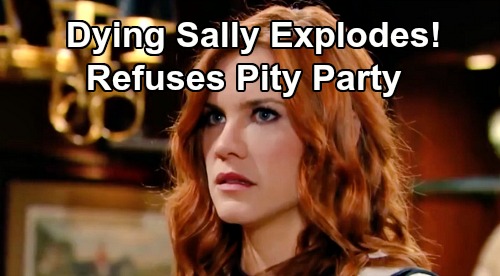 The Bold and the Beautiful (B&B) spoilers tease that Flo Fulton (Katrina Bowden) will try to put Wyatt Spencer’s (Darin Brooks) needs first. After Katie Logan (Heather Tom) shares Sally Spectra’s (Courtney Hope) devastating diagnosis with Wyatt, he’ll really struggle with it. Wyatt won’t know what he could possibly say or do to help Sally, but Flo will hope she can at least help Wyatt.

B&B viewers can expect Flo to comfort Wyatt in his time of need. He only recently decided to break things off with Sally and still cares about her. Just because Wyatt wants Flo now doesn’t mean he can shut off his Sally feelings completely.

Flo will understand that, so she’ll console Wyatt as best as she can. She’ll give him a pep talk and most likely encourage him to support Sally.

Of course, Flo may worry about what this means for her latest reunion with Wyatt. She might fear that everything’s going to come to a screeching halt now, but she’ll try not to be selfish here.

This is about Sally and her serious medical battle. Sally may be dying, so Flo will want to show some compassion. B&B fans who question the seriousness of the diagnosis need to remember that Brad Bell made it clear that Sally will be in a desperate struggle for her life.

However, Sally’s bound to fly off the handle once she realizes her secret has spread this far. Even if Flo doesn’t know all the details, she’ll be one more person who knows.

Sally will be appalled once she learns Katie has blabbed to Bill Spencer (Don Diamont) and Wyatt, who’ll seemingly update Flo.

Everyone will just want to help Sally, but she’ll feel betrayed and refuse what she views as a pity party. Sally will still be trying to process things, so it’s understandable that she’d lash out.

Not to mention Katie probably should’ve respected Sally’s wishes and let her share this in her own time. Sally’s the one who’s ill, so she deserves to be in the driver’s seat here.

The Bold and the Beautiful spoilers say a massive outburst is likely brewing for Sally. It’ll mostly be due to the stress and sadness of her illness, but it should be an explosive reaction nonetheless! Katie will inevitably be left wondering if she made the wrong call.