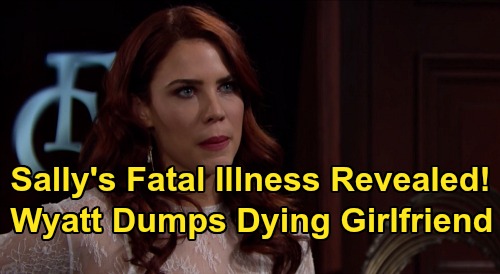 The Bold and the Beautiful (B&B) spoilers reveal that Sally Spectra (Courtney Hope) will keep a shocking secret. Sadly, Sally will feel like her world’s falling down around her as she deals with this bombshell. She’ll face several personal and professional problems, but her biggest one will be this secret of hers.

It turns out Sally’s battling an illness – and it sounds like it’s quite serious. It makes sense considering Sally’s having trouble on the job and got shaky over her potential firing.

Sally was left in tears as she wondered what was wrong with her. Even Sally’s slipup where she called Wyatt Spencer (Darin Brooks) by Liam Spencer’s (Scott Clifton) name could tie in with some sort of brain issue.

After she gets her diagnosis, The Bold and the Beautiful spoilers say Sally won’t feel like she has anyone to confide in. She won’t want to tell Wyatt since things have already been weird between them. Sally won’t think she can confide in Steffy Forrester (Jacqueline MacInnes Wood) either due to all the drama at work.

During the week of January 20-24, Sally will end up turning to Katie Logan (Heather Tom) for comfort and advice. B&B fans know Katie was hit with a stunning medical issue not too long ago. Her kidney crisis really threw her for a loop, so she can put herself in Sally’s shoes here.

The Bold and the Beautiful spoilers say Sally will come clean about her illness. Once Katie offers support, she’ll undoubtedly think Wyatt would want to support Sally, too.

Unfortunately, Wyatt has no idea any of this is going on. He’ll decide to dump Sally due to her old feelings for Liam Spencer and most importantly, his own feelings for “Flo” Fulton (Katrina Bowden).

Wyatt surely wouldn’t kick Sally when she’s down, so he should be in the dark when he breaks things off. After Sally faces that crushing blow, she may back out of telling Wyatt she’s sick. Sally wouldn’t want Wyatt to stay with her out of pity.

Will Katie ultimately spill the news of Sally’s illness? Will she fill Wyatt in and leave him torn about his future? The thought of losing Sally could be a game-changer for Wyatt. The Bold and the Beautiful spoilers say this love triangle will turn into a deeply moving story for 2020 – one that could leave Sally’s life in jeopardy.

After all, we know a stunning death is coming up this year. Sally also made that cryptic comment about how things would be OK with Wyatt – even if it killed her! There’s a chance Sally could succumb to this mystery illness, so that’s something to keep in mind as this hot plot moves forward.

It sounds like some gripping drama’s in store. We’ll give you updates as other B&B details emerge. Stay tuned to CBS soap and don’t forget to check CDL often for the latest Bold and the Beautiful spoilers, updates and news.