BY hellodrdavis on February 9, 2020 | Comments: 4 comments
Related : Soap Opera, Spoiler, Television, The Bold and the Beautiful 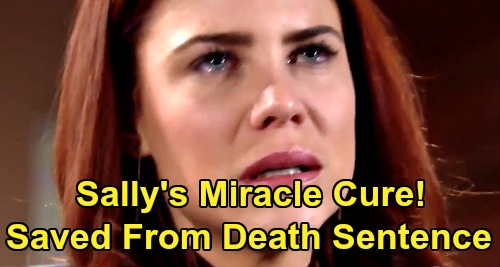 The Bold and the Beautiful (B&B) spoilers tease that Sally Spectra (Courtney Hope) will soon get some devastating news. As B&B viewers know, she’s about to receive a devastating medical diagnosis, and she’ll learn that she’s got very little time left to live. It will be absolutely stunning for Sally, and she’ll really struggle to process the situation she’s now in.

The Bold and the Beautiful spoilers say Sally try to head back to work and carry on with life, which could be much more difficult than she thinks. In fact, Sally is shown in the most recent B&B preview promo lamenting about how she only has a month left, then staggering and falling, as Katie Logan (Heather Tom) tries to catch her.

It’s really going to be a heartbreaking time for Sally and for those who care about her. Katie will do her best to help Sally, but it seems that Sally won’t want Wyatt Spencer (Darin Brooks) or others to know about what she’s going through.

Of course, Sally will just be overwhelmed and won’t want Wyatt to feel like he needs to return to her out of pity or just because he feels bad for breaking off their engagement.

But eventually, B&B spoilers say that Katie will betray Sally’s confidence and tell Wyatt what’s going on with Sally and her diagnosis, since it will be pretty clear that Sally won’t ask for help or support on her own.

Things sound pretty bleak for Sally at this point, and it really seems that she’s going to be given a terminal diagnosis that she won’t want to seek treatment for.

Perhaps it will be the case that there’s a treatment that could possibly extend her life by a few weeks or months. Many times, such treatments come with serious side effects, which could be why Sally will at least initially want to refuse treatment.

Of course, there’s always the possibility that Sally could get enrolled in an experimental clinical trial that could extend her life, or that could even provide a miracle cure.

There are plenty of B&B fans who would love to see Sally make a complete turnaround from her diagnosis, and frankly that would be great to see, although we should note that a B&B character’s death is forthcoming this year, so it could very well be Sally.

But for Sally to even consider enrolling in a clinical trial (if it comes to that), then she might need some persuading on that front. The Bold and the Beautiful spoilers say that Katie will do her best to persuade Sally not to refuse treatment, but it might take more than that.

Perhaps Wyatt will be able to appeal to Sally and help her decide to give treatment a shot – and who knows, maybe there’s a miracle cure out there!

Do you think that Sally will find a miracle cure for her illness? Stay tuned to B&B and don’t forget to check CDL often for the latest Bold and the Beautiful spoilers, updates, and news.