The Bold and the Beautiful Spoilers: Scott Clifton Reveals the True Love of Liam’s Life – Steffy or Hope, You’ll be Surprised 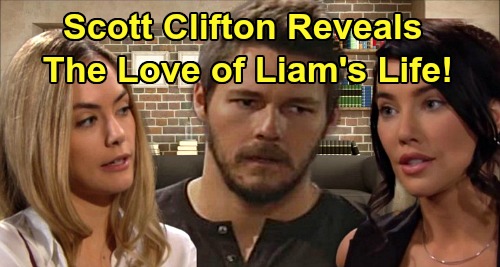 The Bold and the Beautiful (B&B) spoilers reveal that there’s always been a fierce debate among fans – and it revolves around Liam Spencer’s (Scott Clifton) true love. Is it Steffy Forrester (Jacqueline MacInnes Wood) or Hope Logan (Annika Noelle)? That all depends on your perspective, but Scott Clifton recently shared his view in the latest issue of Soap Opera Digest.

For starters, Clifton admitted that Liam is definitely an indecisive guy when it comes to love. “Of all the wafflers, I win – I am the waffle king!” Clifton joked. All kidding aside, Clifton confessed that the waffling can be tough to play sometimes. He talked about how he’s been with his real-life wife for 15 years, so he can’t relate to Liam’s inability to commit to one woman.

In fact, Clifton suggested that he’s pretty much nothing like idealistic, naïve Liam. He called Liam’s way of thinking “flowery” and suggested that it’s difficult to justify his character’s behavior. That said, Clifton does have an opinion on Liam’s true love – although he was quick to point out it’s not exactly his own.

Instead, The Bold and the Beautiful star tried to get inside Liam’s head. “So, I think if you were to ask Liam, not Scott, but Liam, Liam probably believes Hope is the love of his life,” Clifton said. “I think Liam believes that he and Hope are star-crossed lovers and that they are destined to be together and [I] think he almost has a cosmic duty to make things work with Hope because that’s his soul mate.”

However, Clifton acknowledged that Steffy’s the one who challenges Liam and works really well with him. He assured viewers out there that he wasn’t choosing sides; he was just trying to share Liam’s viewpoint. When it comes down to it, Clifton suggested that maybe we’ll never know who Liam’s meant to be with.

“There is no answer and that’s the beauty of it because the story must go on,” Clifton said. Do you think the love of Liam’s life is Steffy or Hope? Would you rather see Liam just move on from both of them?