The Bold and the Beautiful Spoilers: Steffy and Ridge’s Top-Secret Plan to Help Sally – Surprise as Sally Marches Toward Death 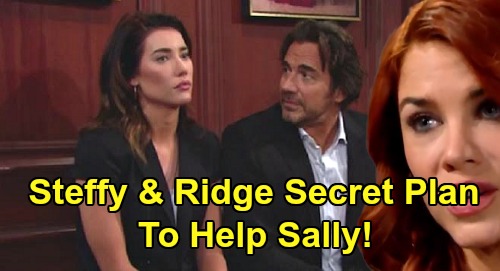 The Bold and the Beautiful (B&B) spoilers tease that Katie Logan (Heather Tom) will fear the worst as Sally Spectra (Courtney Hope) continues to face design struggles. She’ll realize the team at Forrester Creations just isn’t going to understand. It’s not a matter of Sally losing her touch or not being able to handle the pressure. Sally is deathly ill and deserves to be cut a little slack.

Of course, Sally doesn’t want anyone to know about her diagnosis, so that’ll force Katie to step up. She’ll refuse to stand by and let the Forresters kick Sally when she’s down – even inadvertently!

The Bold and the Beautiful spoilers say Katie will hope to make things better for Sally in some small way. It looks like Katie may resort to spilling Sally’s secret once again.

B&B spoilers say Ridge Forrester (Thorsten Kaye) and Steffy Forrester (Jacqueline MacInnes Wood) are the key players here. They’ll be the ones Katie needs to speak with during the week of February 24-28.

Katie will vow to do whatever it takes to save Sally’s position at Forrester Creations. She won’t think Sally should have to lose her job on top of everything else.

After all, it wouldn’t hurt Steffy and Ridge to keep Sally on in her final weeks of life. That’s what Katie will be counting on when she likely blabs. B&B fans can expect an easy decision for Steffy and Ridge soon.

They’ll be in total agreement on what must be done, so that certainly sounds like they’ll be responding to Katie’s updates. The news of Sally’s fatal illness should tug at their heartstrings.

The Bold and the Beautiful spoilers say Ridge and Steffy will put a secret plan in motion – one that’s sure to give Sally a shock! Once Sally learns what they’ve been up to, she’ll be completely blown away. It could naturally leave Sally with some suspicions about Katie’s loose lips, too.

Ridge will reveal that they’ve done something with Sally’s designs, so this probably involves letting them take center stage and truly shine. They may hold a special event and make Sally the true star of the show. If these are Sally’s farewell fashions, they need to do it up right!

The Bold and the Beautiful spoilers say Sally still won’t be keen on pity, but maybe she’ll be convinced to enjoy success while she still can. Whether Steffy and Ridge reveal what they know or not, Sally deserves a chance to make one last splash.

Let’s hope there’s still hope for Sally’s miraculous recovery down the road. As other updates and news emerge, make CDL your leading source for Bold and the Beautiful spoilers.